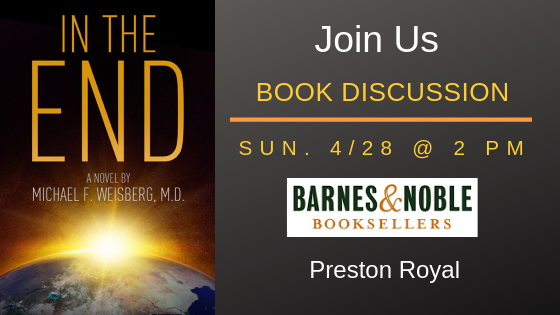 His first novel, The Hospitalist (2014), was a prescient and humorous thriller about the practice of medicine in modern times. In 2016, Michael F. Weisberg, M.D. gave a TEDx Talk on How the Art of Medicine Became a Business in the 21st Century.  That talk now has over 5,000 views on YouTube.

Dr. Weisberg explains that the initial idea which sparked his newly released novel, In The End, came from one of his routine steps proceeding surgery.  "Before I put patients to sleep for their colonoscopies, I ask if they have any questions. Many comically reply, Doc, what’s the meaning of life?" "I always reply that their question cannot be answered because there is no one meaning to life, but instead the question should be, what gives meaning to their individual life?."   In the first half of In The End, five characters search for what gives meaning to their lives. They sort through issues such as religion, their relationship with God, abuse, loss of a loved one, ambition, economic disparity, and life after death.