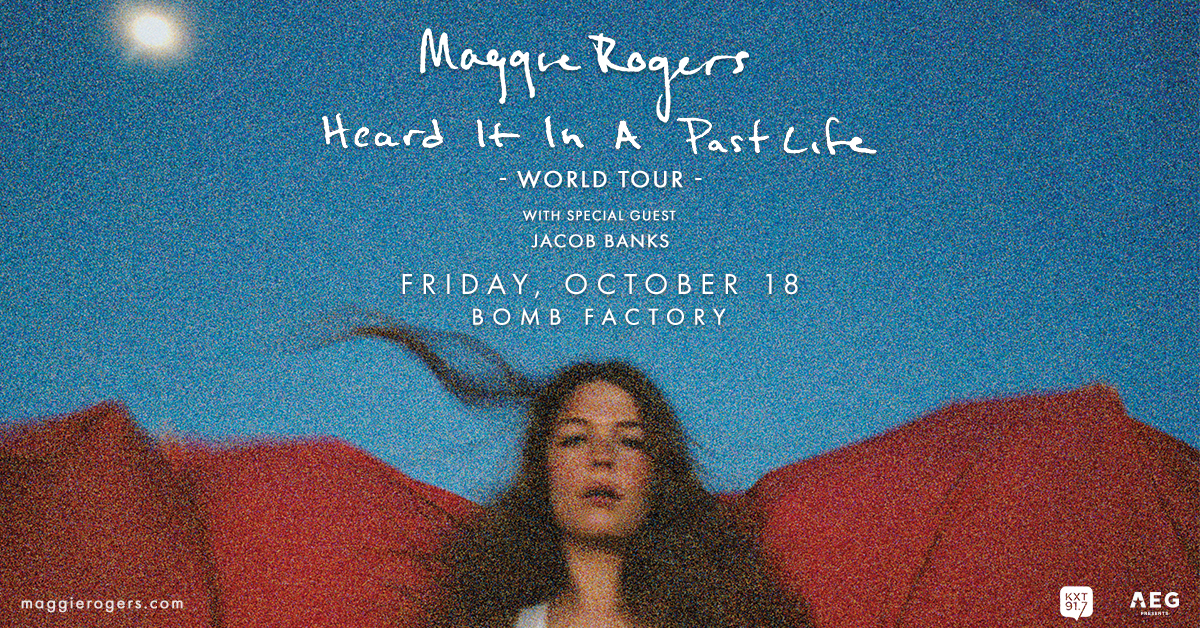 *This show is sold out.*

Maggie Rogers heads to The Bomb Factory for her Heard It In A Past Life World Tour on Friday, October 18, 2019, with special guest Jacob Banks. Doors open at 7pm, show starts at 8pm.

Acclaimed producer/songwriter/performer Maggie Rogers released her Capitol Records debut album, Heard It In A Past Life, on January 18, 2019. The album debuted at #2 on the Billboard Top 200 and #1 on the Top Album Sales chart. Her new single, “Light On,” is out now. Written by Rogers, the song was produced by Greg Kurstin + Kid Harpoon + Rogers and premiered as Zane Lowe’s World Record on Apple Music’s Beats 1. Heard It In A Past Lifeincludes the song that introduced Rogers to the world, “Alaska,” which has accrued over 100 million global combined streams to date. The album also contains the follow-up singles “Fallingwater,” praised by NPRas “a celebration of the terrifying yet thrilling process of change” and “Give A Little,” which Pitchforkhailed as “cathartic pop song about empathy and unity.” Maggie Rogers grew up in Easton, Maryland. After graduating from NYU’s Tisch School of the Arts, she released her critically acclaimed debut EP, Now That The Light Is Fading. The BBC, Tidal, Google Play, Vevo, Pandora and numerous publications –including Rolling Stone, NYLON, SPIN, Billboard and more –have tipped her as an artist to watch. NPR named her one of its Favorite Musicians and The New Yorker declares, “Maggie Rogers is an artist of her time.” Rogers’ television performances include “Saturday Night Live,” “The Tonight Show Starring Jimmy Fallon,” “Late Night with Seth Meyers” and “The Late Late Show with James Corden.”