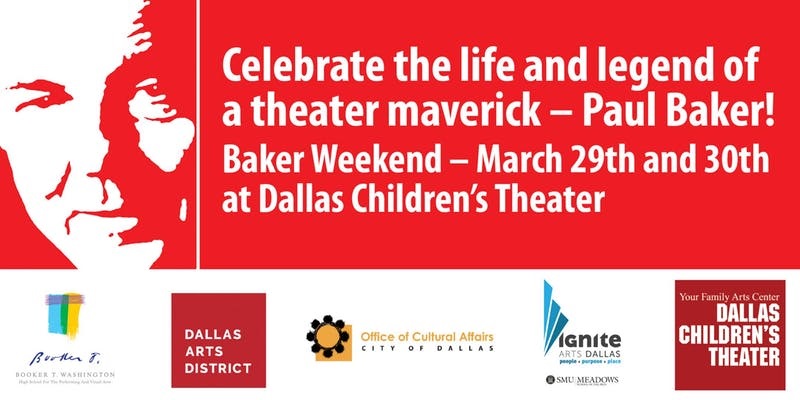 A Baker Weekend is divided into three parts to encourage guests to attend as much of the event as possible. Registration is free but required at BakerWeekend.eventbrite.com.

“A Baker Weekend is the best way I can think of to honor the roots of the collective organizations that have evolved in our city as a result of the genius of our own Texas visionary, Dr. Paul Baker,” says Robyn Flatt, Founder and Executive Artistic Director of Dallas Children’s Theater. “As founder of the Dallas Theater Center and the first Director of Booker T. Washington High School for the Performing and Visual Arts, Baker’s legacy continues to flourish and inspire artists, educators and administrators. A Baker Weekend brings everyone together to look at his philosophy, and his contribution and impact on the field of artistic creativity.”

Booker T. Washington High School for the Performing and Visual Arts, Dallas Theater Center, Dallas Arts District, Ignite Arts Dallas, SMU Meadows School of the Arts and the Office of Cultural Affairs City of Dallas are joining together to promote and support A Baker Weekend.

“Paul Baker was a visionary artist. His work as the founder and leader of Dallas Theater Center for twenty-five years serves not only as an amazing story that’s a beautiful window into the past, but also as a source of inspiration for all of us as we look to the future. It is for this reason that we are honored to be a partner in A Baker Weekend,” says Kevin Moriarty, Dallas Theater Center Artistic Director.

Saturday, March 30 from 12:30 to 5 p.m. Dallas Children’s Theater. Dialogue and discussion with esteemed guests from the local, state and national arts scene.

The event is free but registration is required at BakerWeekend.Eventbrite.com. Register for all or parts of the program. For more information call 214.978.0110.