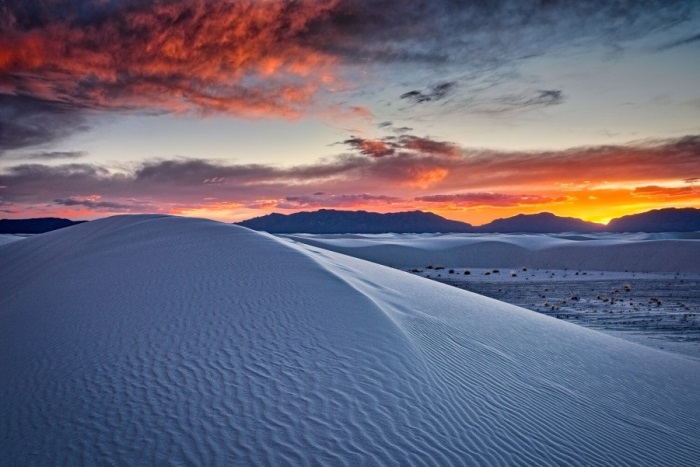 Afterimage Gallery is featuring the work of New Mexico photographer Craig Varjabedian. His latest project and book is called Into the Great White Sands. Over a five-year period, he photographed White Sands National Monument, working in color rather than his usual black and white, with stunning results. The book is published by the University of New Mexico Press and was a New Mexico-Arizona Book Award winner.

The Afterimage Gallery show consists of very large color photographs in sizes not normally shown by the gallery. A reception and book signing will be held for Varjabedian on Saturday, March 16th, from 7:30 to 9:30 p.m.

Varjabedian is very sensitive to what he calls “the power of place.” The monument is located at the northern end of the Chihuahuan desert and is the largest surface deposit of gypsum sand in the world. It’s almost completely surrounded by military facilities. Varjabedian observes, “I want the land to tell the story, not for me to show what I think of the land.”

He was born in Canada in 1957 and has lived in Santa Fe for decades. He has been awarded various grants, one being from the National Endowment for the Arts. He has authored several books, and his work is in numerous private and public collections. His work has been exhibited in many one-person museum shows, including one at the Meadows Museum a number of years ago.

Contact Ben Breard with further questions at 214.871.9140. The full show can be viewed on the gallery website at www.afterimage.com. The exhibit will end April 9. Afterimage Gallery was established in 1971 and is one of the oldest photographic art galleries in the world.