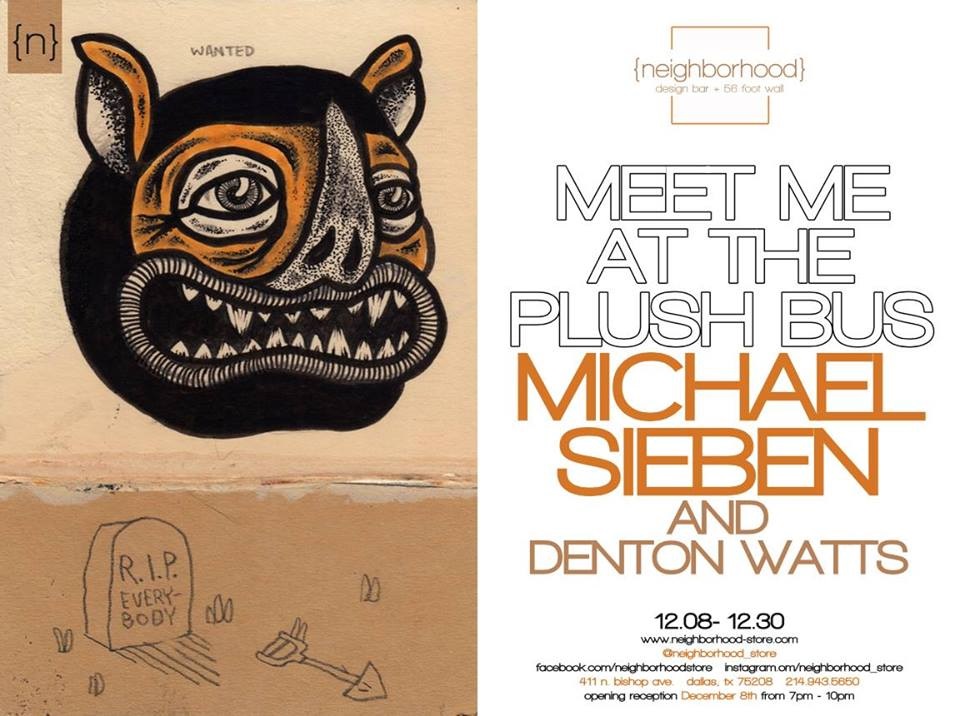 Meet Me At The Plush Bus: New Works by Michael Sieben and Denton Watts

On view from December 8-29.An opening reception with be held on December 8, from 7-10 p.m. Both artists will be in attendance to the event and lite refreshments will be provided.

Michael Sieben is a professional designer and illustrator whose work has been exhibited and reviewed worldwide as well as featured in numerous illustration anthologies. He is currently the managing editor at Thrasher Magazine and has a monthly column in Juxtapoz Magazine. He is also a founding member of Okay Mountain Collective in Austin, Texas, as well as the co-founder of The Program skateboards. He lives and works in Austin, TX with his wife Allison, son River, and daughter Eve. Some of his clients include; Adidas, Foundation Skateboards, Indio Cerveza, Juxtapoz Magazine, K2 Snowboards, MTV, Nickelodeon, Surfing Magazine, Thrasher Magazine, Toy Machine Skateboards, Vans, Vice Magazine, Volcom Clothing...

Denton Watts is an illustrator, printmaker, and designer based out of Austin, Texas, and is very well known for his flashy style of art. Denton is another powerhouse in design with clients including Shiner, MTV2, Volcom, O’Neill, Reebok, Dakine, Converse…