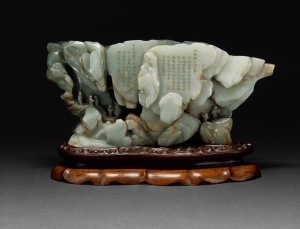 Immortal Landscapes: Jade from the Collection

Mountains lie at the heart of Chinese culture and art. A bridge between the human and transcendental realms, they have provided an enduring source of inspiration for poets, scholars, and artists, and continue to remain an important theme within China’s various artistic traditions. The idea of the scholar-official or monk retreating into the mountains into a life of reclusion — whether from physical danger, political turmoil, or the ups and downs of professional service — has a longstanding history in China. Many artists sought solace in representations of nature, at times realistically and in direct likeness, or at times playfully with whimsical and bizarre representations and perspectives. Under their hands, mountain forms were idealized and fantasized. They billow like clouds, flow like water, or rise to great peaks in order to illustrate the infinite power and creative force of nature. Makers of Chinese decorative objects would focus on natural forms in creating objects for the scholar’s studio, where complicated contortions in roots and rocks, mini landscapes on their own, were admired and appreciated.

Drawn from the museum’s outstanding collection of later-period Chinese jade objects, this exhibition will focus on carved jade representations of mountain landscapes and forms from nature. For both sculptor and viewer, landscape imagery illustrates an understanding of the inseparability of oneself from the surrounding world, where the journey through the mountains is symbolic of the path to an unattainable immortal realm.