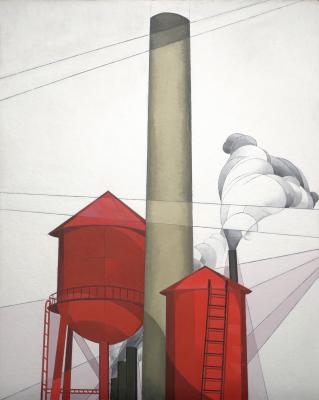 Cult of the Machine: Precisionism and American Art

Cult of the Machine examines American culture from the 1910s to the Second World War and reveals how the American love affair with new technology and mechanization shaped architecture, design, and the visual culture of the United States. This tour-de-force presentation includes key paintings by American Precisionists such as Charles Sheeler, Georgia O’Keeffe, and Charles Demuth, and iconic works by the masters of straight photography such as Paul Strand, Berenice Abbott, and Edward Steichen. Their creations were highly structured, geometric compositions with smooth surfaces and lucid forms that sought to mimic a streamlined, “machined” aesthetic, with themes ranging from the urban and industrial to the pastoral. Reconciling realist imagery with abstracted forms, Precisionism married the influence of avant-garde European art styles such as Purism, Cubism, and Futurism with American subject matter.

Cult of the Machine: Precisionism and American Art requires a $16 ticket with discounts for seniors, students, and military. DMA Members and children 11 and under are free.