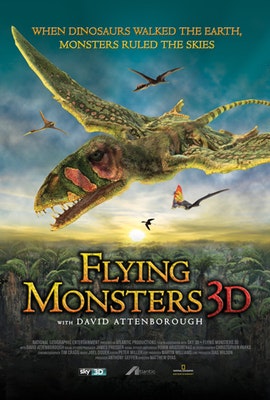 Through the wonders of stunning digital technology, audiences are transported to the depths of the rainforest, times long before humankind existed and wild lands a world away. The Museum’s cutting-edge 297-seat theater features brilliant 4K digital projection, immersive surround sound, and incredible RealD 3D capabilities that come together to create an unmatched theater experience in both 2D and 3D formats.

Just as dinosaurs began their domination of Earth, pterosaurs ruled the prehistoric skies. With wingspans as wide as a modern jet plane, these flying reptiles were as spectacular in appearance as they were amazing in flight. Join world-renowned naturalist and documentary filmmaker David Attenborough as he recounts the fascinating story of how humans first discovered these creatures and how pterosaurs were able to get off the ground and soar . . . until their sudden disappearance from Earth.