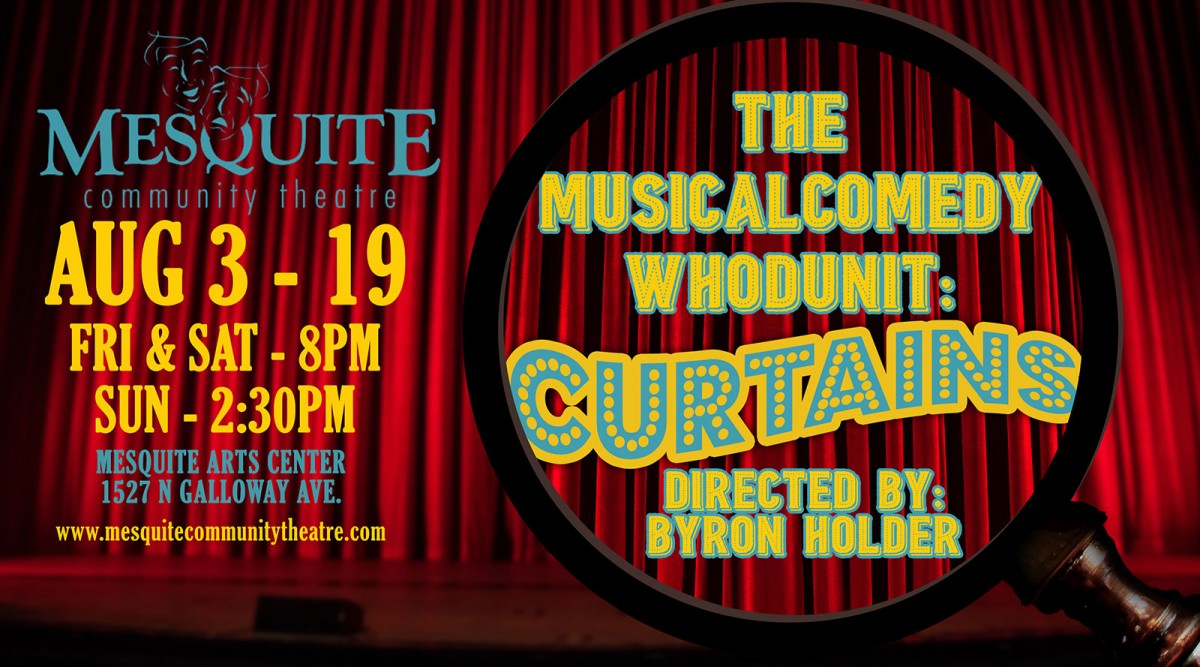 The Mesquite Community Theatre is proud to present Curtains, a musical comedy whodunit set in the 1950s. Curtains features music by John Kander and lyrics by Fred Ebb, the same creative team best known for the musicals Cabaret and Chicago. Curtains' book is by Rupert Holmes, based on the original book and concept by Peter Stone. Curtains will run for three weekends, August 3rd through August 19th.

Curtains is a bright and brassy musical set in 1959 Boston, where the Colonial Theatre is hosting the pre-Broadway run of a new musical. The show could be a success were it not for the extremely untalented leading lady. Jessica Cranshaw is a triple threat: she cannot act, sing, or dance (or remember when to say her lines). When she mysteriously dies on stage during the opening night curtain call, the entire cast and crew are suspects. Enter Lieutenant Frank Cioffi of the Boston Police, who arrives on the scene to investigate. He just happens to be a musical theatre fan! The lure of the theatre proves irresistible, and after an unexpected romance blooms for the stage-struck sleuth, he finds himself just as drawn to making the show a hit as he is in solving the murder. Can he crack the case, save the show, and get the girl before the curtain rises?

Curtains runs for nine performances in the Black Box Theatre in the Mesquite Arts Center, located at 1527 N Galloway Ave. Mesquite, Texas 75149 from August 3-19. Performances are Friday and Saturday evenings at 8:00 pm, and Sunday afternoons at 2:30 pm.

Curtains tickets are available online at http://mesquitecommunitytheatre.com/tickets.html, by phone at 972-216-8126, or by email at reservations@mesquitecommunitytheatre.com. Walk-in tickets can be purchased day of performance on a first-come first served basis until the house is full - Box Office opens one hour before curtain on site. Seating begins a half-hour start time and ends promptly at curtain. Seating is limited, so calling ahead is recommended.