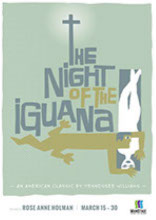 The Night of the Iguana

THE NIGHT OF THE IGUANA

MARCH 15-30, 2019
An American Classic by Tennessee Williams
Widely known as Tennessee Williams’s last great play, The Night of the Iguana grapples with some of life’s biggest mysteries. A defrocked priest has been accused of having inappropriate relations with a teenage girl. He seeks shelter at a Mexican inn run by his blowsy, widowed old friend who finds herself competing for his attention with a kindly spinster who is caring for her grandfather, an aging poet. Of this play, The New York Times raves, “This is Tennessee Williams at the top of his form."