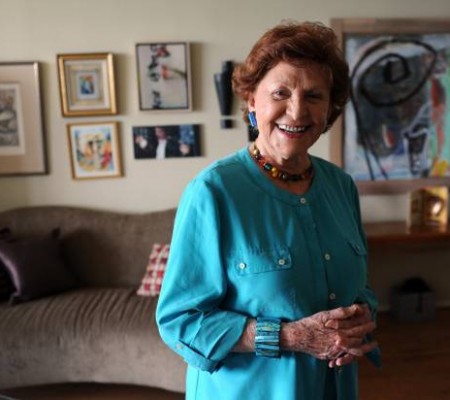 The show will contain paintings and works ranging as far back as the 1950s.

Long a prolific contributor to the Dallas arts scene, Edith Baker was born and educated in Sodia, Bulgaria, where she graduated from the American College with a Bachelor of Arts degree and a proficiency in many languages. She emigrated to the United States in 1949.

Her passion for travel and study of art history continued through periods spent in France, Portugal and Mexico.

Studies at Chicago Art Institute were a prelude to her continued scholarship in Dallas, where she studied during the 1950s with Dallas’ prominent core of contemporary artists: Octavio Medellin, Oriz Dozier, Jerry Bywaters, Roger Winter and De Forrest Judd, names that remain among the most profound contributors to the city’s rich art history. Her passion for painting and sculpture continued to thrive throughout this period.

Starting in the 1960s, Edith taught painting from her home studio for fifteen years. She also taught and lectured, including a three-year symposium at Temple-Emanuel on “Understanding Modern Art: from a curriculum taught at Brandeis University.

In 1977, she became a partner in a Dallas art gallery, which ultimately evolved as the Edith Baker Gallery, with a concentration on the work of local and regional contemporary artists, another evidence of her devotion to the local artistic community. Edith Baker Gallery had a dominant presence in the art community for 25 years.

In 1985, Edith became a charter member and active participant in the establishment of DADA, the Dallas Art Dealers Association. In 1992, Edith Baker and Patricia Meadows co-founded EASL, the Emergency Artists Support League, a non-profit organization to provide financial assistance to North Texas visual artists who are in dire stress because of unforeseen medical emergency or catastrophic events.

The year 1997 brought several hallmarks, including the twentieth anniversary of the Edith Baker Gallery and Edith receiving the Dallas Visual Arts Center Legend Award. She was also featured in the prestigious High Profile article in the Dallas Morning News.

In 2005, DADA, in celebration of its 20th year of existence, created the Edith Baker Art Scholarship, benefitting graduating seniors from Booker T. Washington High School for the Performing and Visual Arts.

In 2007, a renewed passion of study lead Edith to pursue studies in sculpting wax and clay under Lisa Erich at Brookhaven College.

Art has continued to bring joy to Edith’s life, dabbling in various art mediums such as painting, tiles, and ceramics.

2018: Craighead Green Gallery exhibits a Retrospective of Edith’s art in painting, sculpture and ceramics from the 1950s to present.