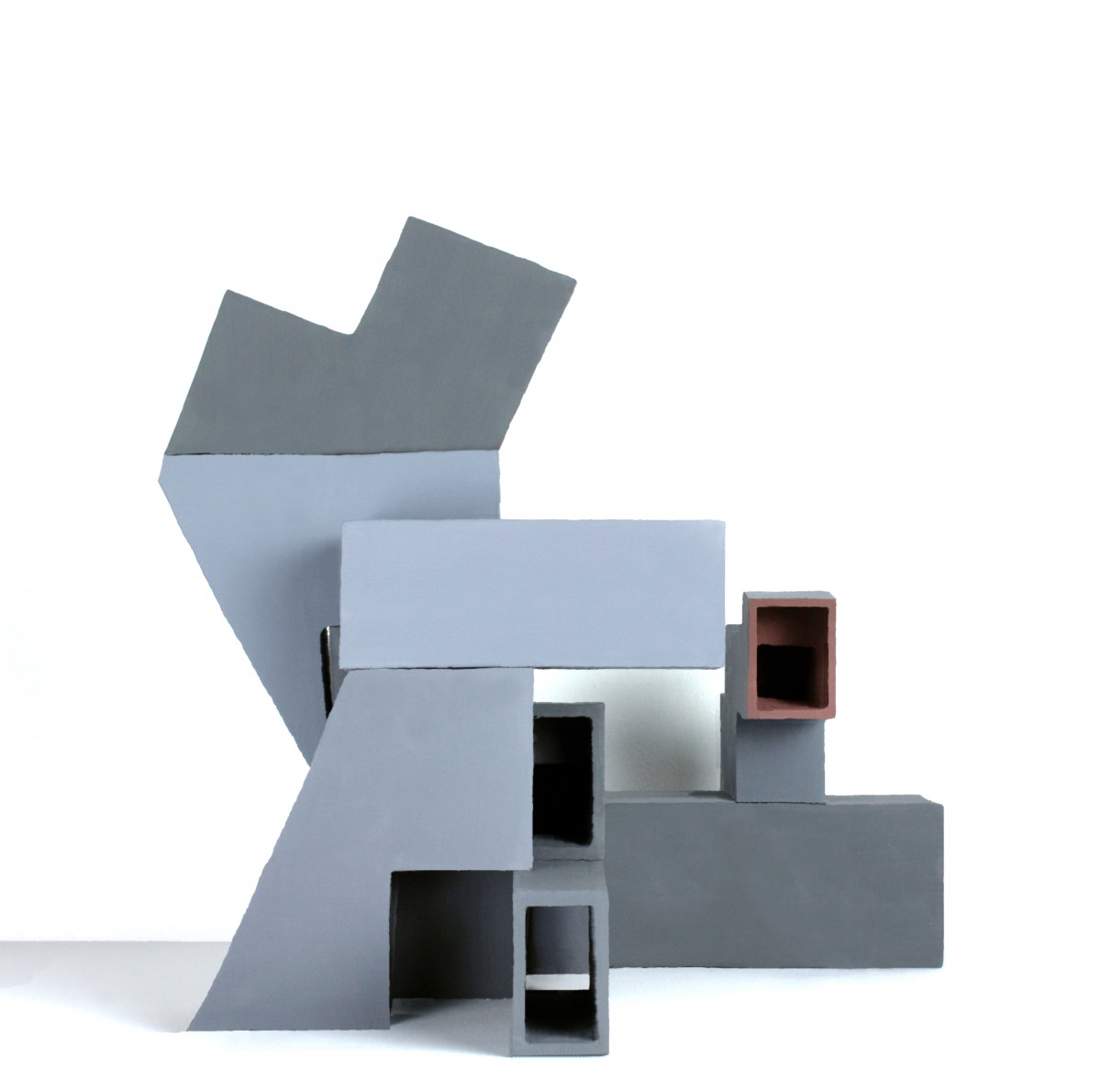 CYDONIA is pleased to announce a special pop-up exhibition in partnership with the historic Texas Theatre. This will be Fort Worth-based Sydney Williams second solo exhibition with CYDONIA. Penumbra opens on Wednesday, April 11, 2018 and runs until Saturday, May 19, 2018. A reception honoring the artist will take place from 7 to 9 in the evening on Thursday, April 19 at the Texas Theatre located at 231 W. Jefferson in Oak Cliff.

In Penumbra, the native Texan continues her exploration of play as work and work as play in her art practice. Williams moves from exploding the scale of driedels and spinning tops in her first exhibition to manipulating and reconfiguring children’s building blocks.

For Williams, the process of creation is not divergent from the act of playing as a child. Her work has always been quotidian, using everyday material to impersonate objects of daily life and/or childhood. The artist creates her own customized set of toy blocks by merging angles with modified cubes to form hybrid ceramic shapes. These hand-built clay form are then stacked to form architectonic assemblages and three- dimensional landscapes. The plinths used to display the sculptures become part of the work itself, as plinths, in themselves, are prisms. Appropriation of the plinth democratizes the authority of the object and its display, illustrating imagination and ingenuity beyond traditions of sculpture display.

Visual challenges for the viewer are compositional and conceptual challenges for the artist. The ceramicist supplants expected color with nuanced deviations: varying finishes and different hues mimic shadow and perspective, demonstrating a linear progression of immediately recognizable childhood toys into what looks like ‘art.’ The purpose of toys, in this hypothesis, is indistinguishable from the (functionless) purpose of contemporary art.

Perception is not led by the mind alone. Maurice Merleau-Ponty postulated that consciousness, our quality of awareness, is mutually engaged and intricately intertwined with the human body and its sensuous machinery. Hand molding of each of Williams’ modular shapes summon a return to the body that is two-fold: that of her viewers and that of the sculptural compositions themselves. Williams’ employment of geometry is counterbalanced by the sympathy of clay and the medium’s reliance on the human touch to find form. Independent of empiricism and intellectualism, Williams’ practice conveys a primal sense underneath her chosen medium and her stylistic indicators. It is this desire to touch, to shape, to form, to stack, and to construct that feels universal. Her spectator has in an instinctual, (pre)sensory exchange with the object, itself. The sensation of holding a block is immediate, creating an inherently phenomenological experience. Williams’ art fashions an experience that is not just visual or intellectual. The body is the source of empathy, the site of emotional and performative identity that defines the experiential encounter.

Penumbra introduces a body of work that tests the absurd divisions we make in life. What makes art ‘art’? Could we expand the definition of art to have function similar to toys? For children, toys build problem-solving skills, promote open-ended possibilities, and ignite imagination. For adults, contemporary art (after Conceptualism) introduces dialogue and discourse. It asks questions. It hypothesizes in oblique manner, through abstraction.

Astronomer Johannes Kepler introduced the word ‘penumbra’ to describe shadows during eclipses. ‘Penumbra’ has multiple meanings: the lighter shadow between a dark shadow and complete illumination; for example, the penumbra is the partial shadow the earth casts on the moon during an eclipse. The darker area is called the umbra. In US law, the word means a set or rights that are not explicitly stated but can be implied from preexisting rights. It also means indefinite or inexplicit. Williams leaves the viewer to determine what is objective and what is inferred. Where are the real shadows the objects cast and where are the shadows she manipulates?

Sydney Williams holds a BFA in Ceramics from Texas Christian University. CYDONIA hosted her first solo exhibition in December 2016. In October 2017, Williams debuted the Stack series based on architecture and children’s building blocks at Art Toronto. Her works are collected throughout the US and Canada. The artist lives and works in Fort Worth, Texas.