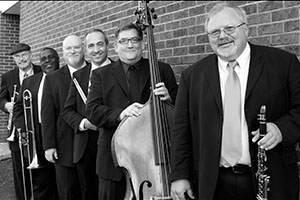 The N’awlins Gumbo Kings have been trumpeting the sounds of Louisianna of since 2002. Co-leaders Steve Howard (trumpet) and Mike Sizer (clarinet/sax), the driving force behind the group, are joined by Bobby Breaux on drums, Carl Hillman on bass, Brian Piper on piano/vocals and Ken George on trombone. The band performs a variety of New Orleans styles including traditional Dixieland, Louie Prima style and New Orleans R&B funk, as well as their own original songs.

Members of the group have worked with numerous artists including Dr. John, The Dukes of Dixieland, Ray Charles, Allen Toussaint, Patti Labelle, Al Hirt, Pete Fountain, Ellis Marsalis, Woody Herman and Cab Calloway. The Gumbo Kings have recorded three albums, with their second recording featuring special guest and long-time friend Dr. John on vocals. It has been said that listening to the Gumbo Kings is like a trip down Bourbon Street without the bad smells. Needless to say, this is a performance you don’t want to miss.

More information about the band can be found at www.gumbokings.com.