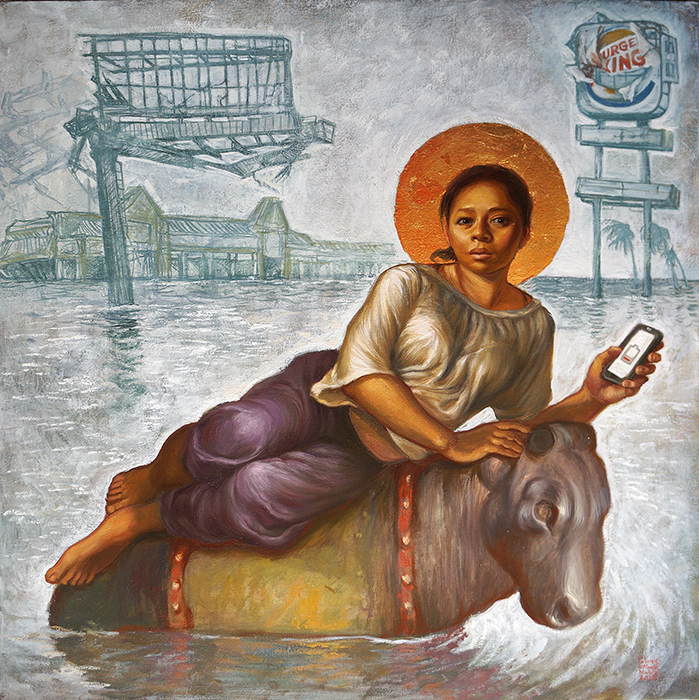 The work presented in OBLIVIOUS is Houston-based artist Patrick McGrath Muñiz’s response to the capitalist consumerist society with its apparent indifference to the rising threat of climate change. After experiencing Harvey in Houston, and witnessing Hurricane Maria passing over Puerto Rico and Irma in Florida, where most of his family and friends live, Muñiz feels the responsibility to tell the story of climate change the way he knows it. As an artist with a Roman Catholic background and growing up in the island of Puerto Rick, Munñiz has a deep personal interest in reconnecting with history by adopting Renaissance painting techniques and retablos reminiscent of Spanish Colonial Art in his painting, bridging historical continuity between the Colonial and the Neo-colonial narratives present in the Anthropocene, an epoch defined by the enormous impact of human activities on the Earth's ecosystems.

Patrick McGrath Muñiz is an artist from Puerto Rico who currently exhibits his work across the U.S. and abroad while residing and working in Houston, Texas. His work consists primarily of oil paintings addressing current issues such as Neo-Colonialism and Consumerism. Patrick's work can be found at the Albuquerque Museum in New Mexico, the Mesa Contemporary Art Museum in Mesa, Arizona, the Savannah College of Art and Design in Savannah, Georgia, as well as a number of private collections in the United States, Caribbean, and Latin America.