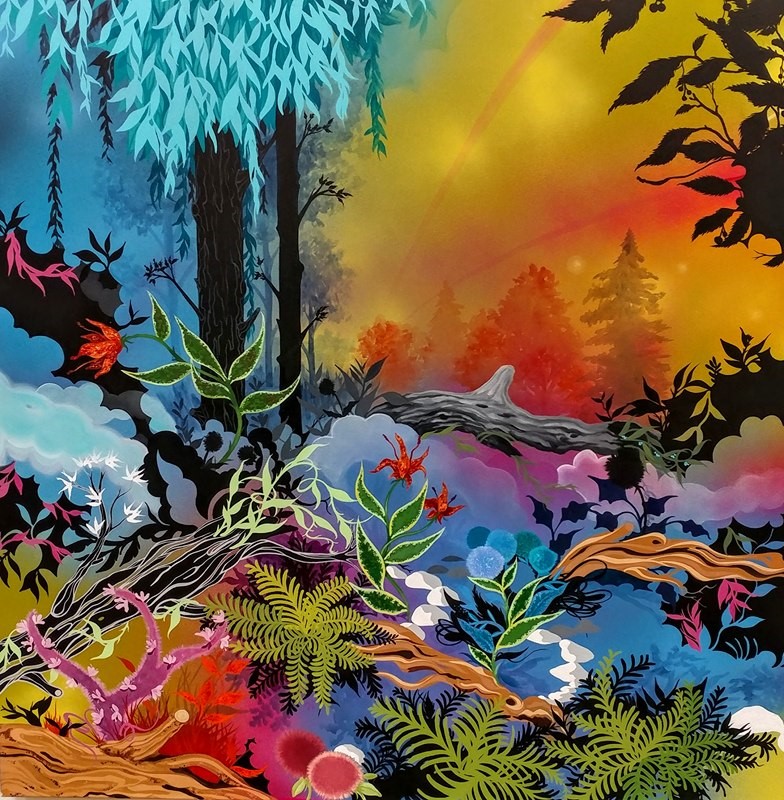 Patricia Rodriguez is an Oak Cliff native and has created art for over 20 years. She is currently a full-time artist and muralist whose works primarily draw inspiration from nature. Patricia says her work uses the investigation of color as emotion and how odd color pallets are made to coexist. Nature is her main focus of inspiration as she hopes to communicate through her work a sense of energy, life, beauty, biology and the hint of threat to reawaken a sense of wonder for an exploration of Nature and Nature as a “subversive” entity that keeps creating and destroying. Appearing in protest through our manmade structures. Patricia likes to explore the topic of “Growth” and growing through challenges, establishing roots, and flourishing despite the odds.

Favio Moreno is a Dallas based artist, working in the fields of Painting, printmaking and design. Moreno has cultivated a visual language drawing from an array of influences, including Latin and American Culture as well as iconography and contemporary design. His signature style utilizes hard-edge painting with an extremely refined sense of color.

Miguel Donjuan was born in Tierra Nueva, San Luis Potosí, Mexico in 1984 to parents Marissa and Ceverino Donjuan. His parents along with his two older brothers, migrated to the states in the summer of 1985. He arrived in Dallas, Texas and has lived there ever since.

Miguel developed a passion for drawing beginning in 1st grade when asked by his schoolmates to draw their favorite cartoon characters. He honed in on his drawing abilities by drawing comic book characters, G.I Joes, and anything that was broadcast on Saturday morning cartoons. In 1996, Miguel discovered graffiti art and breakdancing. Being the youngest of three siblings, he found a constant struggle to keep up with his brother’s artistic abilities. Spray paint became the medium of choice for the next decade or so. Letter structure, color selection, composition, character design, and scale were some of the tools and techniques he developed working on street art, both legal and illegal. Miguel is a self-taught artist who gained his knowledge and abilities through trial and error as well as spending countless hours in art literature.

Miguel mainly works with acrylics, mixed with spray paints. He believes that by combining the two contrasting mediums, he is creating work that is both modern and unorthodox. His work is a combination of figure, pop, street and contemporary. The work carries on subjects which include parenthood, music lyrics, love, hate and childhood night terrors. He describes his work as “a balance of opposites” and “the work is a conversation between opposing ideologies in everyday life. The balance of good and evil, a conflict of mixed emotions, and a beautiful dance of color.” Miguel is a founding partner of the Sour Grapes Art Collective based in Dallas. He takes a hand in creative direction, logistics, and management. The Sour Grapes Art Collective has taken on clients nationwide and across to Europe. As a member of the collective, Miguel works as a digital illustrator developing logos and murals designs as well as mural painting.