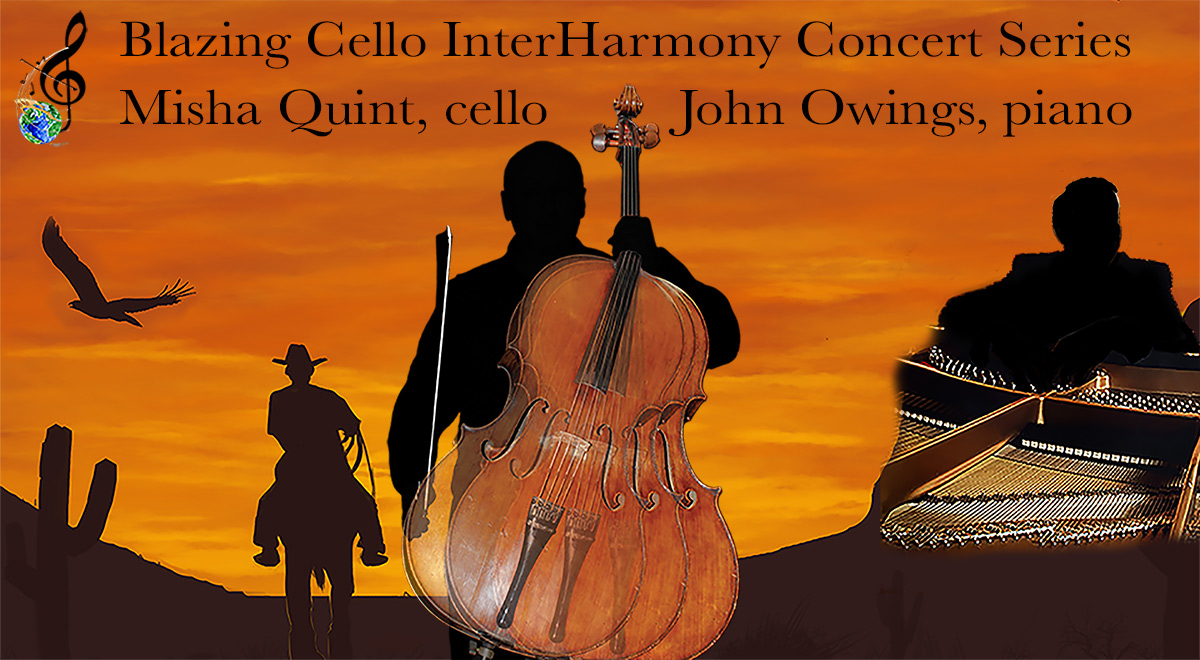 The extraordinary Russian cellist Misha Quint will soar his soul on the wings of the superb pianist John Owings in a varied duo-recital leaning towards Russia, corralled by two masterpiece sonatas encased with several delightful showpieces.

At The Modern Art Museum of Fort Worth, Saturday afternoon February 3, at 2 PM, this event marks the exciting entry of InterHarmony's Concert Series into the Texas scene. InterHarmony® International Music Festival is an organization that presents concerts worldwide, offering the most extraordinary artists with brilliant up-and-coming talents they nurture during their programs in the United States and Europe.

Tickets are $35 for Adults, $30 for Seniors, and can be bought online at www.eventbrite.com/e/blazing-cello-interharmony-concert-series-in-fort-worth-tickets-41259535381 or 2 hours before the concert at the door.

Misha Quint, Music Director and Founder of InterHarmony, is a three-time Gold Medalist in the 2016 Global Music Awards. Mr. Quint has been praised for being "a masterful Paganini-player and a true devil's cellist" in the Sulzbach-Rosenberger Zeitung.

Partnering Mr. Quint is the native Texan John Owings, another artist with an international reputation. The London Daily Telegraph praised him for his "real spiritual elation." A distinguished professor of piano at TCU, he is decorated with the university's highest honor, its Chancellor's Award. More info is at www.interharmony.com

Shostakovich's Cello Sonata opens the program with the seriousness, anger, tragedy, and burlesques one associates with this composer, then Haydn's Divertimento in Piatigorsky's transcription contrasts with its ebullient high-classical style.

Debussy's Cello Sonata explores fantastical themes with Iberian colors, then Schubert's soulful 3rd Piano Impromptu is offered in a transcription; Rostropovich's rarity, Humoresque, will whirlwind an impish and virtuoso dervish. Stravinsky's Chanson Russe cubist' elements are well placed in The Modern, and the evening concludes with Tchaikovsky's Pezzo Capriccio, so sad, yet so brilliant.

Quint and Owings will blaze the hall with torrents of sounds and shapes beyond one's imagination, and we will hear things never heard before, we will feel things never felt before. Posse on down!

The second concert, Souvenir d’InterHarmony, will premiere on March 24, 2018.