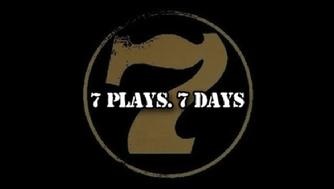 7 Plays in 7 Days, A Mini-Theatre Festival of New Plays

7 new plays will be presented over 7 days.  These staged readings will delight, amuse, intrigue, as they are presented for the first time ever to the public.

Tickets and All Access Passes are now on sale!

All performances are at the Studio Theatre,

Children of the Night  by Joel Frapart & George Morris
Directed by Joel FrapartBeing a vampire father is quite difficult, especially when your three vampire "daughters" won't do as you say.  One is waifish, the other is oversexed, and the third one creates chaotic carnage wherever she goes.  How best to describe this play?  Think "Fiddler on the Roof", but with vampires.Presented Tuesday, February 20, 8 PM with a talkback after the show and Saturday, February 24, 2 PM.

David Kicks the Dog by Collin MillerDirected by Mark-Brian SonnaArthur is a twenty-something painter with schizophrenia who is visited quite frequently by Vanessa who was his friend till she committed suicide. Arthur develops a relationship with Cole, an actor, who ends up in a relationship with Nicholas, a doctor whose specialty is schizophrenia.  The question is: are any of these people real?Presented Wednesday, February 21, 8 PM with a talkback after the show and Saturday, February 24, 12 PM.

When Herod Came to Georgia by James McLindonDirected by LeeAnn Ducker
Based on a true story: Evaline is an enslaved woman whose daughter has been taken hostage by her owners to ensure Evaline does not reveal to Sherman’s Army the gold hidden on the property.  Rebekah, Evaline’s mistress, assures Evaline that she was against the idea, and is sure her father will return her daughter safely once the danger has passed. Cobb is a poor rebel deserter and Brock, a wealthy, oafish escaped Union officer, find their way to Evaline's home and go into hiding. What she doesn't know is that Cobb knows about the treasure and has come to find it, with Brock’s help if he can persuade him. As the play progresses, all four must decide whom they can trust, as past lies and past sins are discovered or confessed. Presented Thursday, February 22, 8 PM with a talkback after the show and Sunday, February 25, 6 PM.

The King of Cage Street by Michael OatmanDirected by Mark-Brian Sonna
D-Bear is an ex-con who lives in the worst section of East Cleveland. Despite his rough path, he has cobbled together a life, purchased a rundown building and is now the owner of a landscaping company. His life is filled with hard work and populated with a pair of colorful characters: Sully, an alcoholic ex-con who works for him and a transgendered prostitute that rents the apartment across the hall. Together this unlikely family finds an uneasy peace in decaying paradise with much hope and humor. This fragile peace is threatened when D-Bear learns that an old enemy he nearly killed many years before is now being released from prison.  Will D-Bear escape his past or become a victim of it? This play explores the meaning of family, and how difficult it can be to leave the past.Presented Friday, February 23, 8 PM with a talkback after the show and Sunday, February 25, 3:30 PM.

Wait. Aren't they Dead? by Joe MajorDirected by LisaAnne Haram
Even after death, the feud continues!  In this "Airplane!" meets "Baby Jane" style stage parody, Oscar winners Bette Davis and Joan Crawford return to the big screen in a schlock horror film from 1967 that was initially buried by the studio after a jealous Kate Hepburn sabotaged its release.  But now, thanks to the Yesteryear Film Society's "theatrical" screening of this lost gem, film fans everywhere can finally see Davis & Crawford's most transcendent film that all but defies to the 2 dimensions of cinema!Presented Saturday, February 24, 8 PM with a talkback after the show and Sunday, February 25, 1 PM.

The Chicken Coop Stratagem by Mike SchraederDirected by Charles Ballinger
Margie Kroll is a middle-aged woman who has problems on a biblical scale.  She’s trapped in a small town.  Her husband is abusive.  Her lover has become “born again” and left her.  And to top it all off, the bar she owns with her husband, The Chicken Coop, is being picketed every night by the congregation of The Mt. Moriah Bible Church of Jessford, TX.  She wants to abandon it all for the sake of finding her independence, identity, and living out her dreams of adventure.  When Margie discovers a way out, she must decide upon comprising her moral integrity for the sake of freedom or taking advantage of a small window of opportunity even though it may mean being haunted by its ethical implications for the rest of her life.  This comedic drama is an examination of a woman attempting to redefine her life against the staunch expectations of living in a small rural community. Presented Sunday, February 25, 8 PM with a talkback after the show and Saturday, February 24, 4 PM.