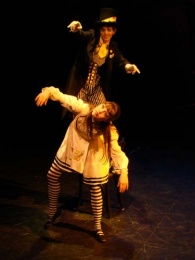 This is the compelling story of Charlie, a mentally handicapped man, and the strange interweaving of his life with that of Algernon, a mouse. Experimental surgery has been performed on Algernon increasing his intelligence fourfold. The operation is tried on Charlie, who rapidly changes from a moron to a genius, far more intelligent than his teacher, Alice Kinnian, or the doctors who created the operating technique. As Charlie approaches the peak of his brilliance, Algernon shows frightening symptoms of regression. The play becomes a race against time in which Charlie tries to keep his new intelligence long enough to save himself and thus continue what he and Alice have found. This is a different kind of play: poignant, romantic, funny and tragic, but with the hope of man's indomitable spirit.