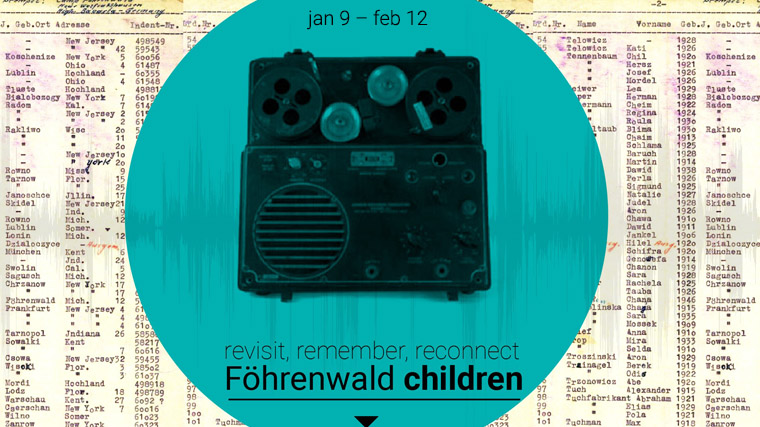 "Föhrenwald Children" are Jewish children who experienced their childhood in refugee camps after World War II and the Holocaust. Föhrenwald was one of the largest “exclusively Jewish” Displaced Persons camps under American Allied control from 1945- 1951. The former Jewish DP camp is in a small town in Bavaria, Germany. Currently, the area is known as Waldram that is a suburb of Wolfratshausen. Surprisingly, refugees now reside in the same place as the previous Jewish DP’s lived in 1945. Those traumatized by the original 1945 displacement also strove to find sanctuary from the same immigration quotas, falsely imposed guilt, and Anti-Semitism that exists today.

Owens’s exhibit will focus on the story of two of these Föhrenwald Children who lived together and grew up in the camp. Many DP children share memories and revive their stories of their ghastly moments of the past. These personal stories are recorded in an interactive documentary that mirrors the present situation in Germany, given the recent influx of refugees.

June Owens is an award-winning director/producer/writer, who is developing a new way to tell her stories. Owens is specifically researching how the history of the past--along with publication of rare documents that have never been published and/or are difficult to access--can be shared through the creation of an Interactive Documentary. This form of digital storytelling gives users and/or audiences opportunities to co-create, learn, discover, explore, archive, and collaborate. Owens researches how oral historians, such as herself, present memories that transcend cultures and borders.  In particular, she considers how these projects can be shared in public spaces, including the participation of museums, communities, families, archives, and libraries, to explore identity (public/private), memory, and a sense of place.

Owens has created 120 videos/films in her 20 years of working professionally in television and film production as a director/producer/writer. She has won 8 film festivals and directed documentaries that have had impact and created awareness. Her documentary on domestic violence was screened at the Dallas Museum of Art and two other documentary films she directed/produced are in the permanent museum collections.