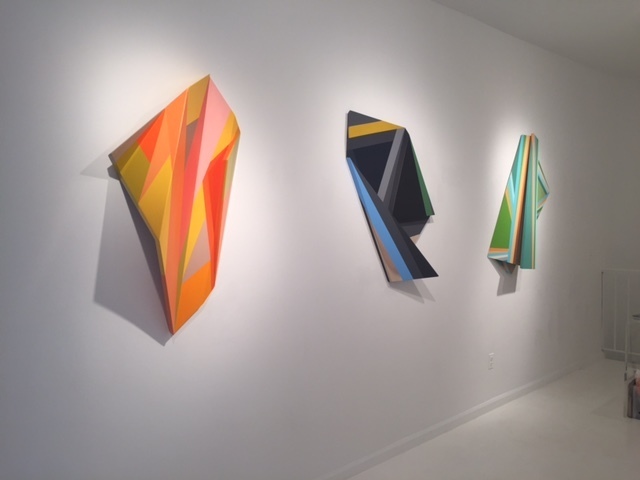 Galleri Urbane welcomes back Rachel Hellmann for her second solo exhibition in Dallas. Named Doubling the Cube, the exhibition title references an unsolvable, ancient geometric problem that requires the use of only a compass and straightedge. The challenge behind the puzzle remains fitting for Hellmann’s interests, who approaches her work through the blend of creative ingenuity and meticulous problem solving that is involved with producing mathematical solutions.

The artist will present two ongoing bodies of work that aim to blur the distinction between painting and sculpture. In the first series, Hellmann utilizes solid poplar wood to create folding, accordion-like forms that protrude from the wall. In a process that requires acute precision and attention to detail, cardboard and styrofoam maquettes are configured in the studio and ultimately finalized in wood. Responding to the object’s geometric form, Hellman paints each sculpture with saturated hues of hard-edge color. The work’s origami-influenced structure casts shadows across its surface and onto the wall, further enhanced by the painted lines of acrylic. The interaction between the naturally occurring shadows and the applied surface geometry creates an alluring conversation between physical and illusionistic space, inviting the viewer to investigate from all angles.

Complementing the sculptural objects will be a series of works on paper. Crisp, white paper serves as the ground for colorful, geometric compositions that echo the shapes found in the works’ sculptural counterparts. Floating on the flat, white picture plane, the angled shapes of color imply perspective and depth. While reality presents the viewer with paint on a flat field, visual perception nonetheless insists on vibrant objects that twist and fold in multiple dimensions. Altogether, the pieces in Doubling the Cube provide viewers with engaging opportunities to consider each work as a visual puzzle to be solved.

The public is invited to an opening reception for Doubling the Cube, taking place on Saturday, November 18th from 6:30 – 8:30 PM at Galleri Urbane Dallas, with an artist talk at 5:30. Concurrently, the gallery will be opening its third annual small works exhibition, The Gift Edit, in the showroom.

Rachel Hellmann lives and works in Terra Haute, Indiana. Her work has been exhibited in solo and group shows in museums and galleries across the country and can be found in numerous private and public collections, including that of the University of Maine Museum of Art and the William P. Clements Jr. University Hospital on the campus of the UT Southwestern Medical Center. Recently the recipient of an Individual Artist Grant by the Indiana Arts Commission, Hellmann has also participated in many residencies around the nation. She has exhibited with Galleri Urbane since 2015, with a solo exhibit Quad Line in 2016.