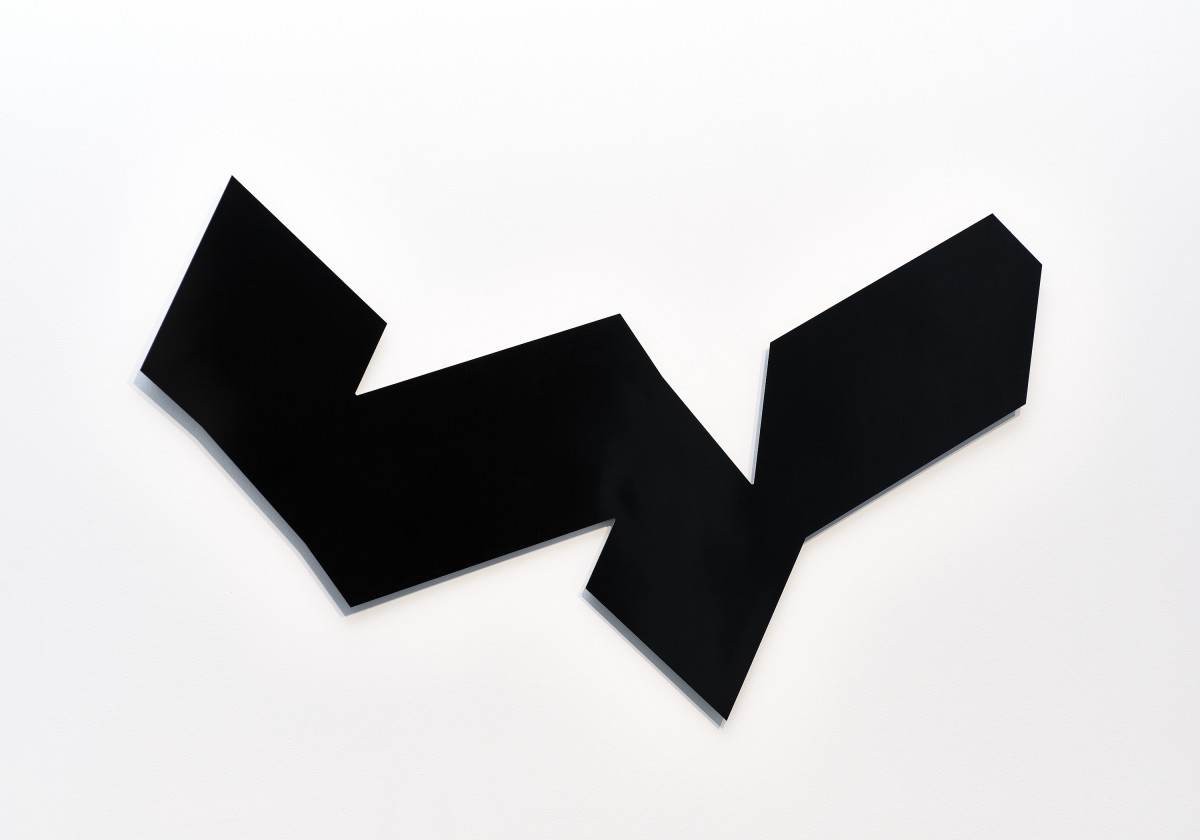 CYDONIA is pleased to announce A Present Abstract, an exhibition of drawing, sculpture, and photography by Niall McClelland, Jade Rude, Jon Sasaki, Derek Sullivan, and Jim Verburg. Curated by writer and curator Alex Bowron, the exhibition opens on Saturday, November 18, 2017, and runs until Saturday, December 16, 2017. A reception honoring the curator will take place at 909 Currie Street in the Fort Worth Cultural District on Saturday November 18, starting at 6 until 8 in the evening.

A Present Abstract features two works by each artist that originate from the same or a related series. Works act as points of study within the artists’ greater practice that employ abstraction as a tool for reconciling contemporary art’s relationship with the past. By addressing the legacy of art-historical abstraction and its continued influence on art-production today, these artists create new and aptly self-assured forms of abstract representation. The works display a convergence between representation and abstraction that operate between perception and the physical object.

Níall McClelland’s practice has long involved unpredictable and unconventional approaches to reproduction. With his latest ink-on-paper drawings, McClelland methodically crops, enlarges, and simplifies self-sourced imagery themed around machismo, the genius and hero figures, utopia, and their inevitable collapse. Although removed from their original context and transformed into contemporary, benign versions of historical Op Art, the imagery maintains the aura of its original source. In these works, the line between cool and cringe-worthy is blurred, the anti-climax is fetishized, and the apocalypse is romanticized.

Other works explore the relationship between reality and representation though challenging the space between the pictorial, the illusionistic, and the actual. Jade Rude uses perception-shifting tactics to explore formal elements of space and form. Her two works Dürer Solid, Form and Flat and Dürer Solid Unfolded and Flattened are formalist explorations of the ‘Dürer Solid,’ which was modeled after the truncated rhombohedron depicted in the iconic engraving Melencolia I (1514) by Albrecht Dürer. Rude’s work destabilizes the viewer’s perception of two and three- dimensionality.

Jon Sasaki’s series of charcoal rubbings are crude reproductions of famous works on paper. By employing a method of transfer meant for obtaining surface detail to a one-dimensional piece, Sasaki performs both an homage and an erasure of the original. The resulting monochromatic charcoal squares contain nuances that are mostly the result of Sasaki’s hand and maintain a precarious connection to the content and concept of the original works.

In his Mirror Drawing series, Derek Sullivan probes the reflective surface of a standard everyday bathroom mirror. Resulting drawings are both abstract and representational at once, capturing the optical effects of reflected light and shadow through a technique that prioritizes pattern and surface. Sullivan’s multi-disciplinary practice combines the visual aesthetic of modernist design and geometric abstraction with the forms and strategies of conceptual art to create a cacophony of messages and inter-work refractions.

Jim Verburg represents light and shadow through a complex and emotional approach to minimalism. His works both echo and reimagine the historical canon of abstract expressionism, presenting delicate portraits of depth, focus, and texture that emit infinitely subtle visual noise. By mimicking the characteristics of reflection, absorption, opacity, and translucence, Verburg treats light as both material and subject, in order to push the boundaries of the physical by prioritizing the intangibilities of form.

A Present Abstract encourages viewers identify with the characteristics of contemporary abstraction. Each artist employs abstraction as part of their conceptual framework as well as their formal approach. In these infinitely nuanced works, viewers witness the juxtaposition between the pure pleasure of looking and a habitual self- reflexivity that is often present in contemporary art. What was once a revolutionary turn of events in the history of art has become a normalized formal technique of artistic expression. Viewers have long understood and accepted abstract art as ‘Art.’ As such, contemporary artists employing abstraction today must do what contemporary artists do best: grapple with their inheritance through acts of apotheosis, appropriation, reconfiguration, and disregard.

Alex Bowron is an art-writer and curator based in Toronto. She holds an MA in Critical Cultural Theory from the University of Leeds, UK and a BFA in Sculpture/Installation from OCAD University. Bowron’s writing has appeared in publications, galleries, and artist projects in Canada and abroad. She is Manager of Operations at MKG127 and current acting Coordinator for the Canadian Art Foundation’s annual fundraising auction.

Níall McClelland grew up in Toronto, spent many of his summers in Northern Ireland, and studied in Vancouver. His work has been published in Adbusters, Arkitip, Color, Design Anarchy, Hunter and Cook, I-Live-Here, Lowdown, Made, and The Walrus, among others. Recent exhibitions include In The Dark at Eleanor Harwood (San Francisco); Resurrection at Cinders Gallery (Brooklyn). The artist was also included along with Jeremy Jansen, Ellsworth Kelly and Richard Serra in the group show Black To Back And Light at CR in 2009. Níall McClelland is based in Toronto where he is represented by Clint Roenisch Gallery.

Jade Rude works in a variety of media including sculpture, installation, photography, and video. Her work addresses surface aesthetics and employs perception-shifting tactics to playfully examine the relationship between reality and representation. Rude has studied at the Alberta College of Art and Design in Calgary, the Norwich University of the Arts in Norwich, U.K., and the University of Oslo in Oslo, Norway. Recent exhibitions and projects include Unfixed at Zalucky Contemporary, Toronto, The Golden Solid at YYZ Artist’s Outlet, Toronto, Surface and Strategem at Division Gallery, Toronto, The Gaze, part of the 10 x 10 photography exhibition at the Gladstone Hotel, Toronto, W: at the Canadian Lesbian and Gay Archives, Toronto and Instant Messaging and Other Texts, a project for the Art Gallery of York University (AGYU) Vitrines, Toronto. In addition to exhibiting in Canada, Rude has also participated in group exhibitions in the US, England, Japan, Australia, Argentina, and Columbia. Her work appears in numerous public and private collections in Canada and beyond. Jade Rude is based in Toronto.

Jon Sasaki is a multidisciplinary artist whose practice includes performance, video, objects, and installation. He has had solo exhibitions at the Ottawa Art Gallery, the Southern Alberta Art Gallery, the Art Gallery of Ontario, as well as a 2015 performance project at the Museum of Contemporary Art Detroit. Sasaki has participated in recent group exhibitions at the National Museum of Modern and Contemporary Art, (Seoul, South Korea), Platform Art Spaces (Melbourne, Australia); Nihonbashi Institute of Contemporary Art, (Tokyo, Japan); and the Museum of Contemporary Canadian Art (Toronto). He has completed various recent public art commissions, and his video work has screened at numerous locations in Canada and abroad. He was the recipient of the 2015 Canadian Glenfiddich Artists in Residence Prize (Dufftown, Scotland.). He holds a BFA from Mount Allison University (Sackville, NB). Jon Sasaki is based in Toronto where he is represented by Clint Roenisch Gallery.

Derek Sullivan employs drawing, painting, sculpture, book works, and installation to question familiar forms and genres, often to examine the links between one discipline and the next. Sullivan holds a BFA from York University and an MFA from the University of Guelph. He has exhibited throughout Canada and internationally, including solo shows the Southern Alberta Art Gallery, the University of Waterloo Art Gallery, Optica, Mercer Union, Kiosk, White Columns, and Librairie Florence Loewy. In 2012, Sullivan was shortlisted for the Sobey Art Award. Derek Sullivan is based in Toronto and is represented by Galerie Antoine Ertaskiran in Montreal, Galerie Emmanuel Hervé in Paris, Susan Hobbes Gallery in Toronto, and Galerie Tatjana Pieters in Ghent.

Jim Verburg’s practice stems from photography and is inspired by the subtle, nuanced, and fleeting affects of light. Solo exhibitions include Afterimage at Galerie Nicolas Robert, Montréal (2014), What is Missing / What is Seen for widmertheodoridis, Zurich at VOLTA NY, New York City (2015), Light Becomes Form, The Horizon Rests Into View at Texas Contemporary, Houston (2015), and Impermanent Horizon at Galerie Nicolas Robert, Montréal (2016). Recent projects include a public art installation for the city of Ottawa, a choreographed work for the Toronto Dance Theatre, a book project with Fw: Photography in Amsterdam; group exhibition For you / And me at Paul Kuhn Gallery (Calgary), and solo projects at Zalucky Contemporary (Toronto), and Rodman Hall Art Centre (Brock University, St Catharines Ontario). Jim Verburg is a Dutch/Canadian artist currently based in Toronto. He is represented by widmertheodoridis in Zurich, Galerie Nicolas Robert in Montreal, and Zalucky Contemporary in Toronto.