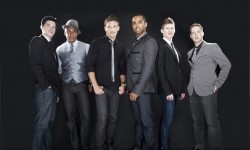 The Richardson Symphony Orchestra will be joined by the critically-acclaimed Broadway Boys to present pop hits of today and yesterday, along with showstopper selections from Broadway musicals including The Sound of Music and Phantom of the Opera. Selections will include Luck Be A Lady, My Eyes Adore You, Can’t Take My Eyes Off of You, Walk Like A Man, New York Tribute, Seasons of Love, and Defying Gravity. This unforgettable concert will be on Saturday, February 3, 2017 at 8:00 pm at the Charles W. Eisemann Center for Performing Arts, located at 2351 Performance Drive in Richardson, Texas.

The Broadway Boys is a collection of the hottest male voices currently working on the New York stage. Through their dynamic vocal prowess and redefining arrangements, the Boys add elements of Pop, Funk, Gospel, Jazz, and Folk to showtunes and classic pop songs. Performing in groups of six, the Boys are able explore harmonies rarely presented by Broadway singers.

This concert is the third in the RSO’s 56th season under the baton of Conductor Clay Couturiaux. Maestro Couturiaux brings energy, precision, and creativity to every RSO performance. He also serves as Assistant Director of Orchestras at the University of North Texas where he teaches fundamentals of conducting technique and orchestral conducting, administrates the orchestral studies area, and is conductor of the UNT Concert Orchestra.