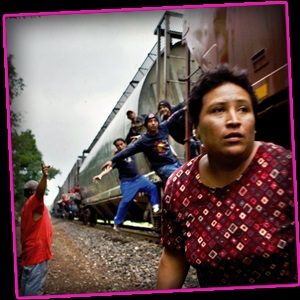 Fort Worth Movies That MatterLatino is a quarterly film series that celebrates the diversity that exists within the Latino culture. Each film screening begins with a light reception and is followed by a moderated discussion with local subject matter experts.

An unprecedented and intimate look at the illegal and extremely dangerous journey of three Salvadoran women to the US. Doña Inés, a 60-year-old woman, has been looking for her daughter for five years and is following the same route her daughter took. Marta and Sandra, tired of the violence from their husbands and wanting to overcome poverty, decide to leave their families behind to travel to America - with only thirty dollars in their pockets. During their harrowing journey, the three women encounter prostitution, slave trade, rape, kidnapping and even death, in an unwavering quest for a better life.

In making this documentary, a team of six journalists and filmographers rode with migrants on the tops of trains and slept in migrant shelters. As the immigration debate continues to be a hot button issue, this film, which helps to bring understanding to these urgent issues, is essential for courses on human rights, Latin American studies, Chicano studies, immigration, labor, international studies and women’s studies, as well as for public libraries and interested community groups.

MTMLatino is made possible through a collaboration between the Fort Worth Human Relations Commission and Artes de la Rosa Cultural Center for the Arts and with support from the Fort Worth Hispanic Chamber of Commerce and the Hispanic Women’s Network of Texas Fort Worth Chapter.