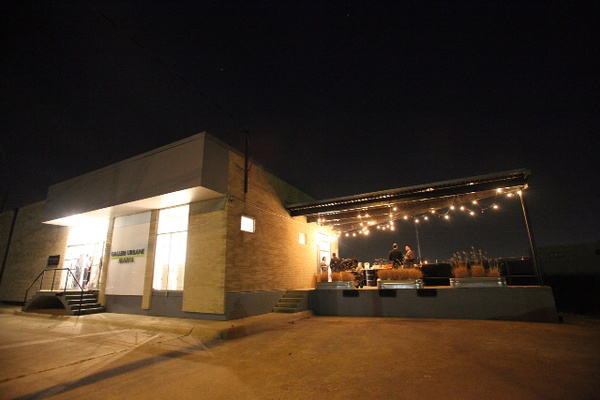 Opening Reception - A Hole A Pool A Moon : Solo Exhibition by Melinda Laszczynski

Galleri Urbane is pleased to present A Hole A Pool A Moon by Houston-based artist Melinda Laszczynski. Coming off a nine month residency at Lawndale in Houston, Laszczynski will exhibit a selection of paintings, sculptures and works on paper. This will be the artist’s first solo exhibition with the gallery.

The body of work debuting this fall is heavily influenced by texture and material, and the possibilities that lie within. Reflective or shifting lenticular surfaces are layered with textured acrylic. Paper and paint skins are torn and collaged, at times removed from one work and placed onto another. Specifically focusing on materials linked to consumption, whether objects or images, Laszczynski points to the reality of oversaturation.

Though each piece speaks loudly with bold colors and a very physical presence, it maintains a level of unexpected subtlety. Glitters, poured latex, and hazy sprays begin to form tactile spaces that shift. For Laszczynski, sculpture and painting are fluid; she considers the in between of mediums, manipulating an illusion of space but also inhabiting space simultaneously.

Much the same, her work teeters spatial boundaries. Both flat and expansive, each piece possesses the potential to be something more than its mixed media components: a hollow opening, a deep inviting pool, or a reflective object for gazing. The exhibition
uses these acting portals, which reference the body or mirror the viewer, to invite interaction and create a dialogue about the experience of looking. Amidst the organized chaos of the works, details of architecture, space and light, or oneself emerge.

Melinda Laszczynski received her MFA in Painting and Drawing from the University of Houston in 2015 and her BFA in Painting from the Cleveland Institute of Art in 2010. She recently completed a residence at Lawndale Art Center in Houston, Texas as part of their 2016-17 Artist Studio Program. This achievement follows Laszczynski’s residency at the Vermont Studio center in 2016.She recently had solo shows at Cardoza Fine Art and galleryHOMELAND in Houston, TX. She has participated in group shows at multiple venues across Texas, including Galveston Artists Residency (Galveston), Inman Gallery (Houston), and was included in the 2015 Amarillo Museum of Art sculpture biennial. Her work is included in the collections of University Hospitals in Cleveland, Ohio, and UT Tyler in Tyler, Texas. Laszczynski was featured in New American Paintings MFA Annual #111 (2014) and #123 (2016).