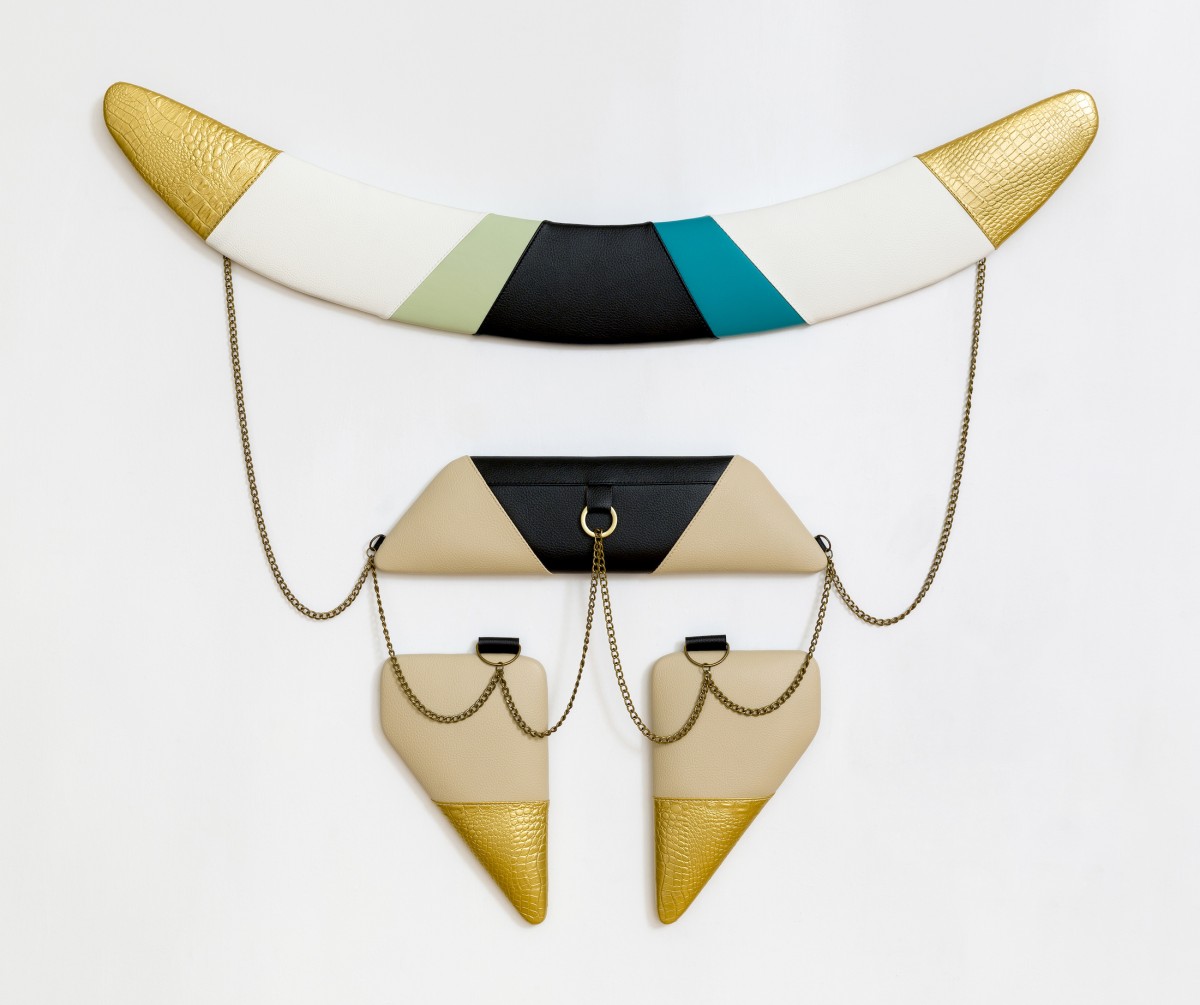 CYDONIA is pleased to announce Homecoming, a curated exhibition featuring Michael Dumontier, Micah Lexier, Trish Tillman, and Emi Winter. The exhibition opens on Saturday, September 9, 2017, and runs until Saturday, October 28, 2017. A reception will take place during Fort Worth Fall Gallery Night, on Saturday, September 9, starting at noon until 9 in the evening at ART7: Crockett Community Gallery, 2955 Crockett Street, Fort Worth, 76107.

Homecoming centers on art negotiating the domestic. Homecoming signifies return, and return is about the familiar. Familiarity produces a cognitive and emotional response, and the artists in this show articulate human thought through an overlapping feeling.

Exhibiting in Texas for the first time, Canadian art icon Micah Lexier will present a video projection and both two and three-dimensional works. In This One, That One, viewers witness a pair of hands arrange and re-arrange everyday materials; cardboard shapes, simple drawings, paper cut-outs of various colors represent the artist’s noesis, simple movement of the individual pieces physically animating his method and thought process. His practice demonstrates plasticity of thought and manifestation where material, process, and form converge.

Objects selected for Homecoming do not require an intermediary of the art system. These artists adopt familiar aesthetics to facilitate an alternate encounter between the object and viewer. In The Logic of Equal Aesthetic Rights, Boris Groys develops an argument concerning art’s autonomy. ‘Art,’ as we define it, came “as result of a long battle of recognition that took place over the course of modernity.” He explains that art, like politics, is connected in one fundamental aspect: they are “realms in which a struggle for recognition is being waged.” Emi Winter’s Zapotec rugs subvert and circumvent the ‘classical avant-garde’ need to be legitimized as an object of artistic desire. The rugs can be installed on the floor or as a tapestry on the wall. Raised in Oaxaca, Mexico by American parents, Winter’s works marry indigenous, pre-Columbian aesthetics with polemics of contemporary painting. Each rug is postcolonial and bi-lingual, woven with iconic designs that date back 2500 years alongside segments of non-representational painting that entered contemporary lexicon 70 years ago. Is Winter’s art more aptly designated as ‘craft’? What happens when a functional object adopts the highly-recognizable vernacular of abstract painting? Why must we treat ‘art’ as ‘art’? Ordinary materials found in daily life develop paths of critical inquiry.

Michael Dumontier’s Untitled (rocks and paper) (face) injects light-hearted levity into the show. The Winnipeg-based artist transports viewers back to our childhood, re-igniting limitless youthful imagination. In this instance, Homecoming is a return to another period of life. More is less. Dumontier arranged the bare minimum of rocks to make a guileless, primitive face. Other compositions in the show also exhibit his immediately identifiable style: powerful restraint framed with soft optimism.

The bizarre and unique can be, paradoxically, common, defying their original notions. Summoning the specific yet proverbial, New Yorker Trish Tillman’s wall-mounted modular works are carefully-composed from a combination of hand-crafted and custom-fabricated pieces along with discoveries, materials, and ornaments found in fetish shops and secondhand stores. Where is the border between artist and artisan? Displaced tassels, segments of necklace chain, metal studs, and phallic shapes find alternative meaning without suppressing erotic desire. A healthy measure of peculiar defiance is interspersed within each work. Tillman’s work re-contextualizes African fertility statues in a new world. A modern anthropologist, Tillman imitates Native American totems, emblems, and colors to draw the viewer in, to inspect spiritual tropes, rituals, and human desires.

Homecoming creates encounters within the dichotomy of what people think is ‘art’ and what ‘art’ is. Perception reflects a different intention; the precious rests within the mundane; the kinky and the conventional become bedfellows. Art still has apprehension about the home even if commercial galleries aim to place works into collectors’ home. Objects in Homecoming return elements of the domestic into the white cube for critical and possibly moral reasons.

Thom Wolf’s novel 'You Can’t Go Home, Again' tells the story of an artist’s search for his own place in the world. The main character struggles to reconcile his responsibilities. An artist observes the human condition, but isn’t he also responsible for eradicating injustice? True to form, Wolfe only describes how one artist tries to find his answer. The curatorial concept was inspired by the question: ‘Can we go home, again?’

CYDONIA expresses our gratitude for support from Birch Contemporary, Asya Geisberg Gallery, MKG127, and the Fort Worth Arts Council

Based in Winnipeg, Canada, Michael Dumontier co-founded The Royal Art Lodge collective in 1996 and continued as a member until 2008, along with Marcel Dzama and Neil Farber. Solo presentations for the Royal Art Lodge have been held at the Liverpool Biennial; the Los Angeles Museum of Contemporary Art; The Drawing Center, New York; and The Power Plant, Toronto. Dumontier maintains a collaborative practice with Neil Farber, meeting every Wednesday evening to collaborate on paintings, drawings, and writing. Dumontier and Farber have exhibited at Plug In ICA, Winnipeg; Salon du Dessin Contemporain, Paris; Galerie de l’UQAM, Montreal; and the Hole, New York. Work by Michael Dumontier can be found in numerous private and public collections including the Vancouver Art Gallery, the Art Gallery of Ontario, and the National Gallery of Canada, and he has held solo exhibitions in New York; Padua, Italy; Boston; Winnipeg; and Montréal. Dumontier is represented in Toronto by MKG127.

Micah Lexier is a Toronto-based artist whose activities including making, collecting, and organizing. He has a deep interest in measurement, increment, the passage of time, found imagery, geometry and display structures. Lexier has undertaken a number of collaborations with other visual artists, with family members, and most notably with writers, including Booker finalist Colm Tóibín, and Griffin Poetry Prize winner Christian Bök. His projects range in scale and permanence from ephemera to public sculptures. He has presented over 100 solo exhibitions, participated in more than 200 group exhibitions and has produced a dozen permanent public commissions. In 2013, The Power Plant Art Gallery hosted a fifteen-year survey exhibition of Lexier’s work entitled One, and Two, and More Than Two. In 2015 Lexier was honored with a Governor General's Awards in Visual and Media Arts. Recent publications include I’m Thinking of A Number, a 30-year survey of Lexier’s ephemera, published by the Press of the Nova Scotia College of Art & Design, and Call Ampersand Response, a collaborative bookwork with Michael Dumontier, co- published by Nieves and Artexte. Lexier’s work is in numerous public and corporate collections including The British Museum, London, England; the Contemporary Art Gallery in Sydney, Australia; The Jewish Museum in New York; The Art Gallery of Ontario; The Vancouver Art Gallery; Musée d'art contemporain de Montréal; and The National Gallery of Canada. Micah Lexier is represented by Birch Contemporary, Toronto.

Trish Tillman was born in Chicago and lives and works in New York. She received an MFA from School of Visual Arts and a BFA from James Madison University. Tillman has had group exhibitions at Fireside Projects, NY, Present Company, NY; Cindy Rucker Gallery, NY; Regina Rex, NY; Emerson Dorsch, FL; and Elephant Art Space, CA, among others. Solo exhibitions include Civilian Art Projects, Washington, DC, and the Arlington Arts Center, VA. She is a recipient of the Joan Mitchell Foundation 2009 MFA Grant, and a 2015 Fountainhead Residency in Miami, FL. She has an upcoming solo exhibition at the Visual Arts Center of Richmond, VA, and is included in upcoming group exhibitions at Washington Project for the Arts and Tiger Strikes Asteroid, Philadelphia.

Emi Winter is a painter who works with textiles and printmaking. She is a graduate of the MFA program at Bard College and received her BA in visual arts from Oberlin College. Her work is included in the collections of the Museo de Arte Moderno de México; Museo de Arte Contemporáneo de Oaxaca; Museo de los Pintores Oaxaqueños; Instituto de Artes Gráficas de Oaxaca; Museo Nacional de la Estampa, México; Grunwald Center for the Graphic Arts; Hammer Museum, Los Angeles; McNay Art Museum, San Antonio; Portland Museum of Art, Oregon. In 2011, she was awarded the acquisition prize in the XV edition of the Rufino Tamayo Painting Biennial in Mexico. The artist lives and works in New Jersey and Oaxaca.

Homecoming collective show opens on Saturday, September 9, 2017, and runs until Saturday, October 28, 2017. The public is invited to a reception on Fall Gallery Night on Saturday, September 9 from 12 – 8 p.m. at 2955 Crockett Street in the Cultural District. This exhibition has select hours: 12 – 3 p.m. on Wednesday, 4 – 8 p.m. on Thursday and Friday, and 1 – 8 pm. on Saturday. The gallery is also open by prior arrangement.