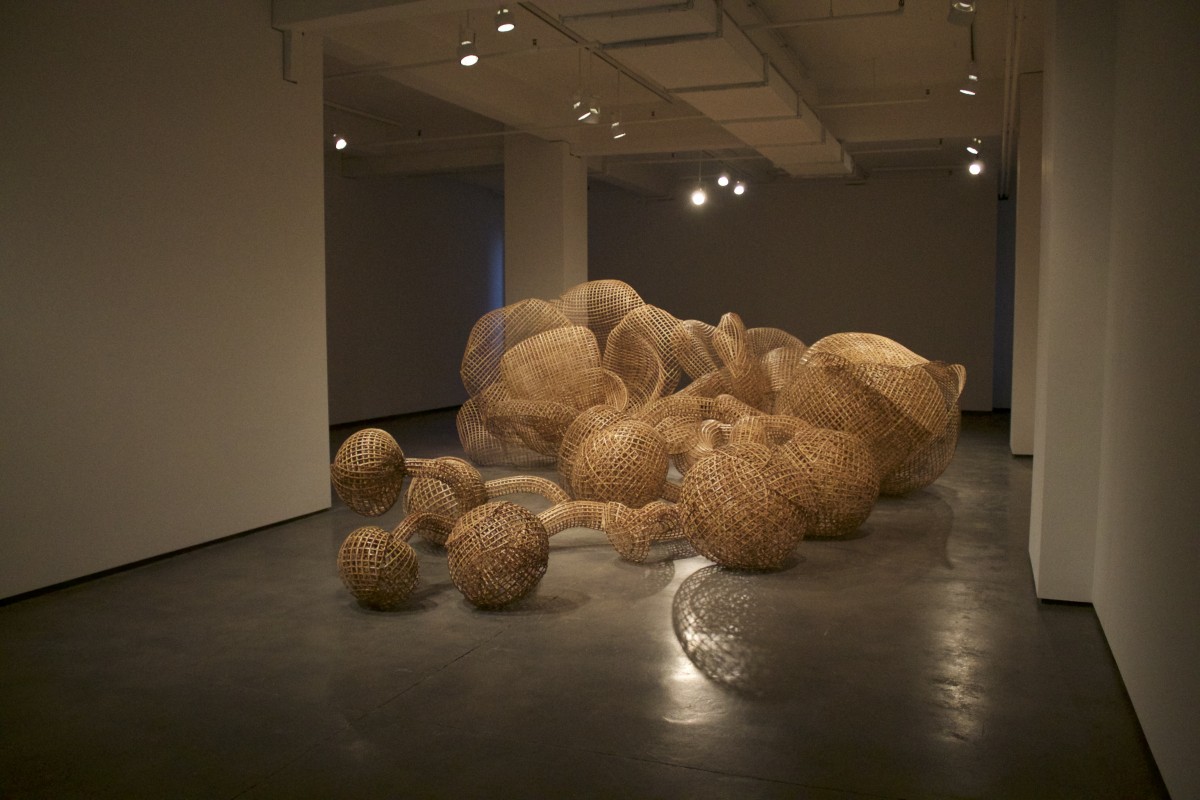 The Crow Collection of Asian Art is pleased to announce the presentation of a solo exhibition of the work of Sopheap Pich, recognized today as Cambodia’s most internationally prominent contemporary artist.

This exhibition will feature his large-scale sculpture, Rang Phnom Flower (2015), his most ambitious single-form sculpture to date. Twenty-five feet in length, its complex construction is composed of hundreds of strands of rattan and bamboo. The sculpture is that of the cannonball tree (“rang phnom” in Khmer), which in Southeast Asia is associated with the sal tree under which the Buddha was born. This tree is often planted near Buddhist temples; many can be found around the temples near Pich’s studio on the outskirts of Phnom Penh. In fact, the plant originated in the Americas and was introduced by Europeans to Sri Lanka, where it was soon revered for its resemblance to the sal tree, which does not grow in tropical climates. It was then brought to Southeast Asia by Sri Lankans, who were responsible for the revitalization of Buddhism in that region. Pich’s tree is created at enormous over-sized scale, which conveys the power of nature, but also brings forward the plant’s abstract qualities by using precise grid–like structure and geometric shapes, in order to consider concepts of scale, the natural and the industrial, and the large that can be found within the small.

Sopheap Pich (b. 1971) is recognized today as Cambodia’s most internationally prominent contemporary artist.  Born in Battambang, Cambodia, he moved with his family to the United States in 1984, and received his MFA from the School of the Art Institute of Chicago in 1999.  In 2002, he returned to Phnom Penh, Cambodia, where he continues to be based.  Pich is known for working with local materials such as bamboo, rattan, burlap from rice bags, beeswax and earth pigments gathered from around Cambodia and making sculptures that are inspired by bodily organs, vegetal forms, and abstract geometric structures.  His childhood experiences during the genocidal conditions of late 1970s Cambodia has had a lasting impact on his work, informing its themes of time, memory and the body.

His work has been featured in numerous international museum exhibitions and biennials throughout the world, notably Documenta 2012, and a 2013 solo exhibition at The Metropolitan Museum of Art (Cambodian Rattan: The Sculptures of Sopheap Pich), which was the museum’s first solo show given to a contemporary Southeast Asian artist.  Major museum collections of his work include The Metropolitan Museum of Art (New York), Solomon R. Guggenheim Museum (New York), Centre Georges Pompidou (Paris), M+ Museum for Visual Culture (Hong Kong), Singapore Art Museum, Queensland Art Gallery, San Francisco Museum of Modern Art, Albright-Knox Art Gallery (Buffalo), and Cleveland Museum of Art.  Most recently, he has been selected to present in the main exhibition at this year’s 57th International Venice Biennale (La Biennale di Venezia), Viva Arte Viva, curated by Christine Macel.