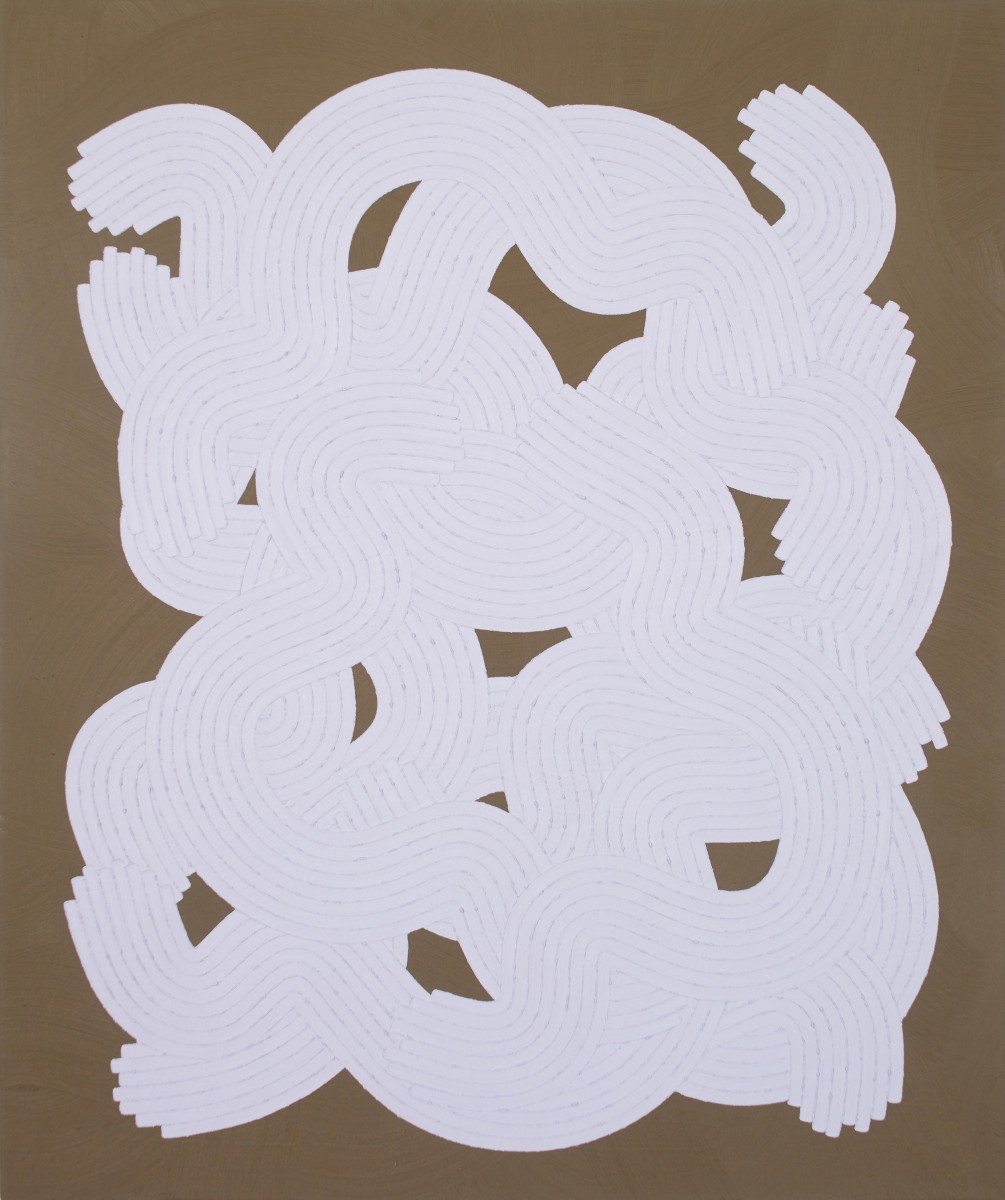 CYDONIA is pleased to announce the return of Caroline Mousseau in her second solo exhibition Surrounding Isolations. The exhibition opens on Friday, June 16, 2017, and runs until Saturday, July 29, 2017. A reception will take place on June 16, from 6 to 8 p.m. in the evening at 2955 Crockett Street, Fort Worth, 76107.

CYDONIA concludes its 2016-17 exhibition year with Caroline Mousseau, the last in our all-female year of programming. The artist’s style is immediately recognizable: repetitive, thick, impasto-like brushstrokes of manipulated oil paints are painstakingly applied in repetitive strokes. The merit of her paintings is not determined by the optical experience for the viewer alone, but Mousseau also incorporates a dialogue about textures and possibilities of paint itself. Powdered pigments mixed with linseed oil are manipulated to stand on her will. Squeezed out of tube, paint is amorphous, but the artist molds sculpts and controls the medium to her exacting vision. Tiny, dried ridges of stacked paint lean towards the viewer in a masterful display of uniformity.

The artist describes her latest series: “These works do not strive to capture the landscape, as painting often has attempted to throughout history, but rather to exist within it.” Mousseau’s inspiration comes from the ambiguity that can be found when one cannot fully comprehend her surroundings. For her, this is the point at which representation and abstraction intersect, and the viewer can begin to “deconstruct the process of observation.” Viewing landscape, like abstraction, is an exercise in perception, noting that repetition is a recurring feature within nature.

Painting, in and of itself, is not only a medium, it is the monolithic genre within art. By choosing to work in painting, Mousseau implicitly negotiates the long history between painting, landscape, and abstraction. Applying derivative elements of these sub-genres, she is able to create hybrid works. Her works are as stylistically lyrical in composition as they are Greenberg-ian in application. The Vancouverite carefully composes a large mass of undulating, ribbon-like trails on an exposed underpainting. The plane of the canvas where a viewer enters and exits is clearly demarcated. Paint doesn’t strive to be something other than itself. Weaving in and out of its own properties, each painting represents two types of the medium’s viscosity. The underpainting is flat, the material gliding on the canvas with ease; the dominant abstraction represents the second less fluid state of paint’s materiality. Her attention to the materiality of paint demonstrates self-evident process and resulting interconnectedness to the optical experience. Her use of color is autonomous from propelling these gestures towards any true sense of representation, with palates stemming from the environs of her hometown, Winnipeg, as well as Vancouver. Titles add a playful and evocative overtone that summons imagination.

This exhibition is supported by the Fort Worth Arts Council.

Caroline Mousseau graduated as the valedictorian of Emily Carr University of Art + Design in 2012. She studied at l’École Nationale Supérieure des Beaux-Arts in 2010. Mousseau has exhibited throughout Canada, and in 2014, she was curated in the exhibition 100 Painters of Tomorrow, with an eponymous book launch, in London and New York. In March 2015, CYDONIA mounted Mousseau’s first solo exhibition. The artist was met with strong Canadian support for her solo presentation at Art Toronto 2016. In February 2017, she was curated in a two-person presentation at Zona Maco in Mexico City entitled Another Chance to Do Right: Emerging Aesthetics Featuring Repetition, Pattern, and Rhythm. In April 2017, Mousseau was curated in her first museum appearance, abNext: Contemporary Abstraction by Emerging Canadian Artists, at the Robert McLaughlin Gallery in Oshawa, Ontario.