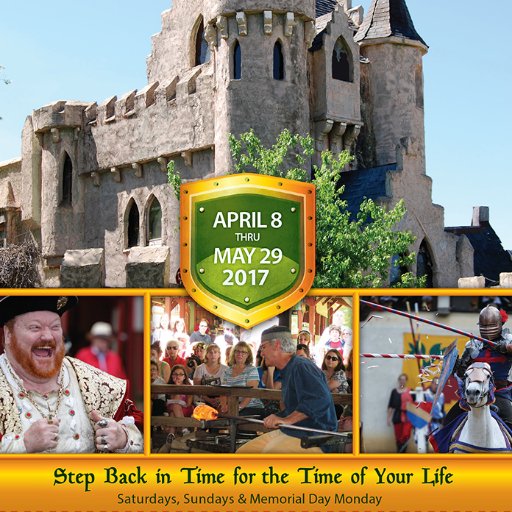 It’s time for Scarborough Renaissance Festival! The 37th season of North Texas’ 16th Century Style tradition begins this Saturday, April 8, 2017! There is interactive fun for everyone at Scarborough Renaissance Festival as you step back in time to the 16th Century in our 35-acre (re-created) English village celebrating the visit of Princess Mary Tudor and Margaret Queen of Scotland and the Isles with a Festival of Entertainment, Artisans, Food, and Frivolity.

Scarborough Renaissance Festival 2017 season will run every Saturday & Sunday (and Memorial Day Monday) for eight consecutive weekends April 8 through May 29, 2017.

“Kids Free Weekend” on April 8th & 9th kicks off our 2017 season with up to three children (ages 5-12) admitted free with each paid adult. Children 4 and under are always free. Seniors 65+ can also get in for half price this weekend.

Some of the exciting new entertainment debuting at Scarborough Renaissance Festival this weekend includes: Idiot Friends (former “Flaming Idiot” and former member of the “Other Brother” - only appearing through April 30th), Dark Faerie Tales with the Painted Lady, The Dancing Doll and Song of Nightingale along with limited engagement performers Topsy Turvy (only appearing through April 30th) and The London Broil Show (only appearing through April 16th). New at the Mermaid Lagoon this year, patrons can choose a time to visit with the Mermaids for a more intimate experience and avoid standing in line. Visit times are available every 15 minutes throughout the Festival day. The Mermaid Lagoon also welcomes mermaid “Aura” for the 2017 season.

There is also food and drink Fit for A King at Scarborough Renaissance Festival. New items for the 2017 include chocolate dipped strawberries, cupcake cones and Cappuccino & Espresso at the Peasant Bread booth. Special menu items for opening weekend will be Bangers & Mash (Irish Banger sausage and mashed potatoes covered with an onion gravy) at the Rose & Crown Inn Restaurant; crab and cream cheese ravioli on Saturday and Beet & Onion Ravioli on Sunday at the Pasta Palace; bacon and white cheddar croissants, New York Style cheesecake swirled with a blend of oranges and sweet cream and coconut mountain cake at the Bakery; and Salmon with goat cheese crepes on Saturday and Beef Stroganoff and Jaeger Snitzchel on Sunday at the German booth.

Wines of Germany will be tasted at the daily wine tasting events this weekend and the beer tasting events will include Beers of Germany. This is in addition to the standard beer, wine, and Mead offerings at the Festival’s 11 pubs and taverns. Tastings require a separate ticket that can be purchased in advance on-line or at the Festival (on festival days). Seating is limited and the tasting events regularly sell out so it is recommended that you purchase your tickets in advance.
“For the 2017 season we are bringing exciting new entertainment, outstanding new artisans and the newest member of the Scarborough monarchy, Princess Mary Tudor, to the Festival”, says Coy Sevier, General Manager. “We are confident that our visitors will experience the best interactive experience of music, magic, and merriment at Scarborough during our 37th season – you don’t want to miss it!”