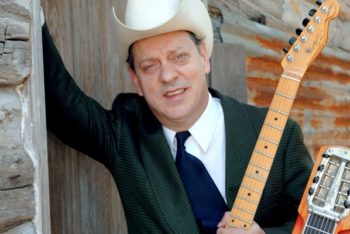 With his unique voice, more unique songwriting and even more unique double-necked “guit-steel” guitar, there has never been anyone quite like Junior Brown. He’s an American original. Junior showed an affinity for music at an early age when the family moved from Arizona to a rural area of Indiana. Junior began to experience country music and remembers it as “growing up out of the ground like the crops – it was everywhere; coming out of cars, houses, gas stations and stores like the soundtrack of a story.” Instead of sticking to country music, Junior has shown himself to be equally adept at a wide variety of American music styles, including rock ‘n’ roll, blues, Hawaiian, bluegrass and western swing. With his writing coming together by the mid-1980s, Junior upgraded his gear in a way that no artist had ever done. Struggling through each show, going back and forth plugging and unplugging guitar to steel guitar while singing, he had a dream one night about the two instruments mysteriously melding into one. The result was Junior’s invention, the “guit-steel,” a double-necked instrument combining standard guitar with steel guitar. The guit-steel allows Junior to switch instruments quickly in mid-song while not skipping a note. Meanwhile, the “Junior Brown” style of songwriting also evolved, employing subtle dry wit to some songs with others being more overtly humorous or just plain dead serious. Like his playing, there is a wide range of styles that when combined can only spell Junior Brown. Since relocating to the Austin music scene, Junior has had Grammy nods, a Country Music Association Award for “My Wife Thinks You’re Dead,” and movie and TV appearances, like The Late Show with David Letterman, The Conan O’Brien Show, Saturday Night Live, Austin City Limits, SpongeBob, The X Files, Dukes of Hazzard, Me Myself and Irene, Tresspass, Still Breathing, Blue Collar Comedy Tours 1 and 2, and more recently, Better Call Saul. He has a Bluegrass Music Association Award, and has performed duets and video collaborations with Hank Thompson, The Beach Boys, George Jones, Leon McAuliffe, Ray Price, Leona Williams, Lynn Morris, Lloyd Green and Doc Watson.