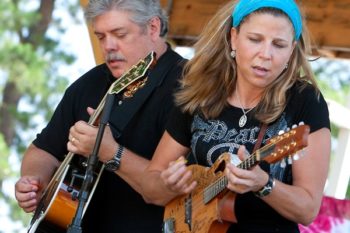 When Texas native and Grammy-winning songwriter Terri Hendrix laced up her “Two Dollar Shoes” and began her journey as an independent recording artist 20 years ago, there was no map or handy guidebook to show her the way. Although she wasn’t the first artist to ever self-release an album, the DIY road was still years away from becoming the busy thoroughfare that it is for so many musicians today. Now two decades and thousands of miles down the line, the trail-blazing Terri Hendrix is still going strong and feeling more inspired than ever before. Recently picked by Acoustic Guitar magazine as one of Texas’ 20 essential contemporary singer/guitarists, Terri has played with some of the best musicians in Texas, most notably Austin City Limits Hall of Fame guitarist/pedal steel player and Grammy-winner, Lloyd Maines. Widely renowned for his work with such artists as Joe Ely, Terry Allen and the Dixie Chicks, Lloyd has worked on approximately 4,000 albums alongside some of the most significant figures in country, rock and Texas music, and has toured with Terri almost exclusively for almost two decades. Terri’s and Lloyd’s charismatic stage presence and reputation for delivering an energetic, feel-good live show, has been embraced by loyal fans across the country and around the globe. As solo acts or as a duo, the pair have entertained crowds everywhere from intimate listening rooms such as Austin’s Cactus Cafe to huge outdoor events, like the Austin City Limits Music Festival and the Newport, Philadelphia and Kerrville Folk Festivals.