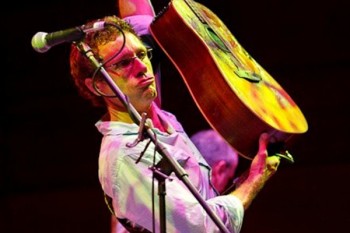 Brad Thompson & the Undulating Band - Songwriting that will rock your socks right off!

Brad Thompson’s musical roots started at an early age. Both of his parents were avid music fans and musicians. Brad’s earliest memories are of his dad picking out Luther Perkin’s guitar parts off of Johnny Cash’s albums. Brad’s mom, an accomplished vocalist and pianist, tried her hand at classical guitar, but when it didn’t work out, she handed her guitar to 12-year-old Brad, who started taking private lessons. As a student at the University of North Texas, Brad became friends with singer/lyricist Eddie Allen and within two years of entering college, they both pursued music full time, writing and performing at clubs like The Hop in Fort Worth, Poor David’s Pub in Dallas, the Kerrville Folk Festival and other havens for young songwriters. Brad went solo in 1992 and has recorded seven CDs. His songwriting and performances show the influences of Michael Hedges, Lyle Lovett, Jeff Buckley, Toad the Wet Sprocket and Counting Crows.