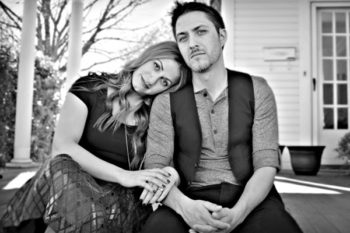 The Gibbonses
A Unique blend of Southern, soul, Americana and R&B

Husband and wife, Jackie and Brandon Gibbons, formed the Dallas-based, multi-instrumentalist Americana duo, The Gibbonses, in early 2015 after relocating from Seattle.

A few months after arriving back in Texas, The Gibbonses became one of only 12 bands selected from more than 150 applicants to compete in Ranch Factor 2015, a battle of the bands hosted by 95.9FM The Ranch, where they advanced all the way to the final four! Since then, the band has logged countless miles with more than 200 performances all across Texas, up and down the east coast, and through the Midwest. In 2016, they released their full-length debut, Among The Rubble, recorded in Los Angeles with producer Jamie Hill. The duo was awarded first place in Rattle Music magazine’s Spring Songwriter Contest and also competed in Larry Joe Taylor’s 2016 Songwriter Showcase. In January, The Gibbonses received the Texas Music Pickers 2016 Newcomer of the Year Award. The Gibbonses have opened for Gary Morris, Blue Water Highway Band, William Michael Morgan, Midnight River Choir, Brandon Rhyder, Kimberly Dunn and Troy Cartwright, to name a few, and had the pleasure of sharing festival stages with Sam Riggs, William Clark Green, Prophets and Outlaws, and many other well-known Texas musicians. For Jackie and Brandon, it has always been their love of performing that has driven them to pursue their musical careers from a young age. Whether they’re performing for 20 close friends at an intimate house concert or onstage in front of a large crowd, the couple have a way of connecting with each and every person in the audience and making them feel like a part of the family.