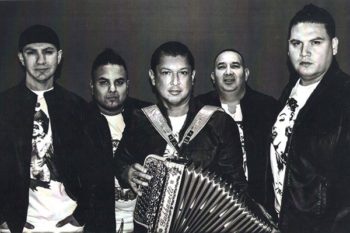 Five-time Grammy nominees Jaime y Los Chamacos’ popularity can be directly attributed to 31 years of combined talent and outstanding ability to appeal to audiences of all ages. Creative choreography, including gravity-defying spins while simultaneously playing the accordion and singing, is the trademark of Jaime De Anda.

Appearances have included night clubs and outdoor performances in Texas, Mexico and across the United States. Televised appearances have included Telemundo and Univision programming, public service announcements and commercials. The group’s CDs range from gold to platinum and include reaching number one on both the Tejano and Latin charts in Billboard magazine. Other achievements include three Latin Grammy nominations, Male Entertainer of the Year and Conjunto of the Year in the Valley’s Choice Awards, and Tejano Globe Awards’ Best Male Entertainer and Best Conjunto of the Year.