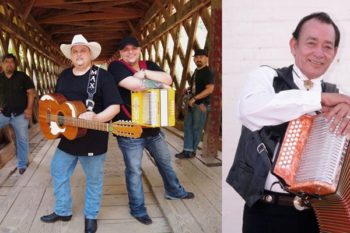 Combine a hefty helping of Tex Mex conjunto, simmer with several parts Texas rock, add a daring dash of well-cured blues and R&B riffs, and you’ve cooked up the tasty Los TexManiacs groove. Founded by Max Baca (bajo sexton and vocals), the TexManiacs are a product of his wide-ranging experience touring and recording with everyone from his father’s family conjunto, Flaco Jimenez, the original Texas Tornados, Los Super Seven and even the Rolling Stones. Like a great salsa, Los TexManiacs mix the simplest, yet finest, ingredients of Texas music to create a sound solidly rooted in tradition, exploding with contemporary vitality. The TexManics’ versatility has led them to performances, such as the Smithsonian Folklife Festival, the International Accordion Festival, the Kennedy Center, the Texas Governor’s Ball and major festivals in Germany, Holland and Spain. Los TexManiacs’ current CD, Borders Y Bailes, won a Grammy Award for Best Tejano Album in 2010. Los TexManiacs are honored to perform with legendary five-time Grammy-winning artist, Flaco Jimenez, whose six-decade career has taken his accordion-fueled TexMex sound to a larger audience than any other conjunto or Tejano artist.