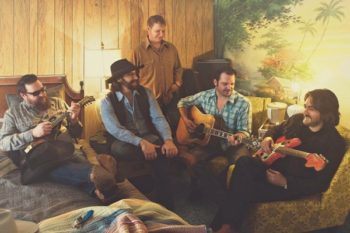 The heartland gave Reckless Kelly authenticity. Musical lives honed their skills. Adversity instilled their persistence, and moving to Austin gave the Grammy winners wings to fly. As kids, the Brauns – Cody, Willy, Micky and Gary – shared a stage with Johnny Cash, Glen Campbell and Merle Haggard. Micky and Gary now helm their own band, Micky and the Motorcars (who performed at the Levitt last summer). Cody and Willy, with drummer, Jay Nazz, created Reckless Kelly. The band took its name from the legend of Ned Kelly, the Australian highwayman, and the three moved to Austin in 1996. Early on, Robert Earl Keen*, a Texas singer/songwriter legend himself, took them under his wing and became their first manager. They listened, watched and interacted with the creative dynamos of the outlaw country scene – Townes Van Zandt, Steve Earle, Billy Joe Shaver, Guy Clark and others – and joined them in a redefinition of what contemporary country music had become. Theirs was gritty, hard-edged, uncompromising and convincing. Their 1998 self-released debut branded Reckless Kelly with a reputation as a band of no-nonsense insurgents that could raise the rafters while still retaining a heart and soul of honesty, soul and conviction. Reckless Kelly’s string of critically acclaimed albums, Under the Table and Above the Sun (2003), Wicked Twisted Road (2005), Bulletproof (2008), Somewhere in Time (2010), Grammy-nominated Good Luck & True Love (2011) and Grammy-winning Long Night Moon (2013), set a standard of reliable excellence and commitment to an instinctive vision of Americana. The group’s new album, Sunset Motel, reflects Reckless Kelly’s attention to craft and continuity.