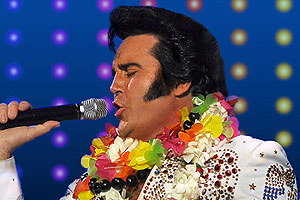 FWSO Concerts In The Garden: A Tribute To Elvis with Kraig Parker

Join us this summer for Concerts In The Garden – a 6-week music festival offering 17 nights of outdoor concerts in June and July at the Fort Worth Botanic Garden on University Drive and Interstate 30 with fireworks every night.

It’s been 40 years since the death of The King, but our love for his music remains strong as ever. Come hear Kraig Parker and his Royal Tribute Band pay homage to Elvis Presley in his 10th FWSO Concerts In The Garden appearance since 2004. Parker has toured with Presley’s original vocal groups The Jordanaires, The Stamps Quartet and The Sweet Inspirations, and critics have called this show “as close as it gets” to the real thing.