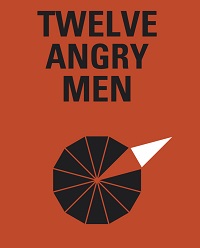 The 1954 teleplay by Reginald Rose became the famous 1957 film (directed by Sidney Lume and starring Henry Fonda) which has long been recognized as one of the most significant courtroom dramas of all time, selected for preservation in the US National Film Registry.

An examination of personalities in conflict while they attempt to build a consensus, 12 Angry Men tells the tale of a life-and-death decision in the case of an 18-year-old boy from the slums on trial for allegedly stabbing his father to death. After a quick preliminary vote, all the jurors except Juror 8 vote guilty. He doubts the veracity of the witness testimony and resists a conviction without due deliberation. From that point onward, this powerful story unfolds in unpredictable, emotionally explosive ways. Mature themes.