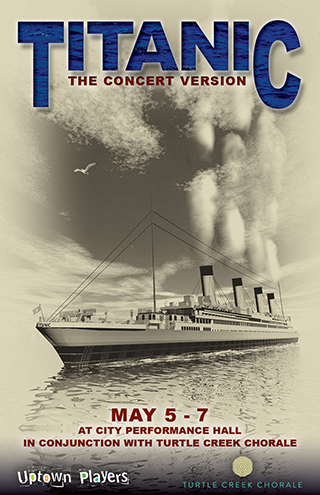 "Titanic," with music and lyrics by Maury Yeston and a book by Peter Stone, opened on Broadway in 1997 and won five Tony Awards including the award for Best Musical.

"Titanic" is set on the ocean liner RMS Titanic which sank on its maiden voyage on April 15, 1912. The musical examines the causes, the conditions, and the characters involved in this ever-fascinating drama. This concert version, with over 100 voices, will be presented in conjunction with the Turtle Creek Chorale and will take place at the Dallas City Performance Hall in the Arts District of Downtown Dallas.