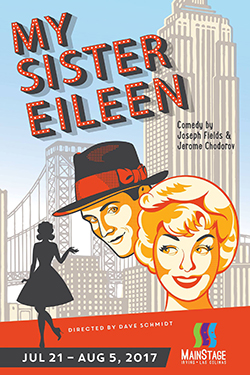 Meet clever-as-they-come Ruth and pretty-as-a-penny Eileen! The Sherwood sisters are headed to the Big Apple to chase their dreams! The gals settle in a beat-up basement studio apartment in Greenwich Village, full of eccentric charm and frequently visited by a cascade of colorful characters, run by landlord Papa Appopolous. Ruth aspires to be a writer, while Eileen longs for the big lights of Broadway. In the pursuit of their ambitions, twelve months of amusing escapades ensue! The play that inspired the hit musical favorite Wonderful Town.
Furious fun flourishes in the city so nice, they named it twice!