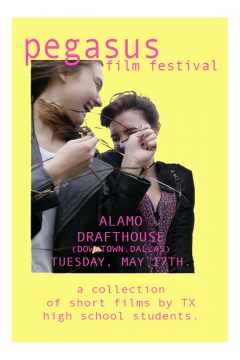 Bursting with rising talent, North Texas holds a wealth of inspiring and innovative films made by young filmmakers. Here at the Pegasus Film Festival, we bring that talent to you. Produced by Booker T. Washington High School for Performing and Visual Art's award-winning filmmakers, the festival continues a tradition of celebrating the works of local visionaries. This year marks a new beginning, as the festival now opens submissions to schools all over North Texas.

Held at the new Alamo Drafthouse in downtown Dallas, the Pegasus Film Festival welcomes you to join the excitement as we share these films with you. After the film screenings, the audience will become immersed in the classic film festival experience, engaging with the filmmakers in a panel conversation and an awards show. Come join the fun, food, and films at North Texas’ newest tradition.