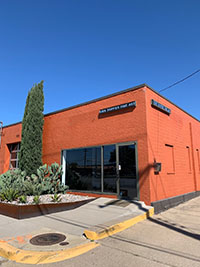 Kirk Hopper Fine Art (3008 Commerce Street) is pleased to announce our upcoming solo exhibition for artist Erin Stafford entitled, MISBEHAVING. Marking her debut at KHFA, Erin Stafford's solo exhibition engages the viewer with concepts relating to ideas of fetishes, absurdity and visual pleasure. Her ability to fluidly combine pomp majesty with quintessential kitch creates a visual language that evokes sensations of creature comforts within a domestic setting. The exhibition opens Saturday, April 16th with a public reception for the artist from 6.30 – 8.30p.
Stafford intends to compose several odes to lost interior spaces that celebrate sentimentality while blending visual surrealism with animalistic undertones, layered with nostalgic references to the decorative arts. With sculptural work, tromp l'oeil painting and installation; Stafford will create a backdrop that relates to ideas of the home as a physical manifestation of the self, ultimately showing the aesthetics and contradictions of decay and beauty in a domestic setting.
In addition, vitrines will be positioned in the gallery space that will display decorative soap sculptures. These soap sculptures were created from dessert molds alongside elaborate garnishes to mimic edible delights. Stafford’s interest stems from soap novelties that resemble food items with absolute verisimilitude along with the historical banquet traditions from centuries past that used food as sculpture. Stafford states, “ I find it curious to imagine washing oneself with soap that bears resemblance to food, while putting it in one’s mouth would be equally off-putting.”
Erin Stafford’s aesthetic tendencies are reflected in her studio practice as a result of her affluent upbringing in Dallas, Texas where she found upper-middle class expectations full of irony and contradiction. This sense of cultural refinement, which included various forms of ritual and tradition, shaped her identity until 2002, when she began her art education at the University of North Texas. It was here that she was surrounded by eccentric artists and jazz musicians, which inspired her to challenge established social conventions. After receiving her MFA at the University of Texas at San Antonio in 2009, she returned to her hometown where she continues her studio practice along with teaching. Her recent exhibitions include “Hugs and Kisses” at Mountain View College in Dallas, TX, “Biennial 600 - Sculpture” at Amarillo Museum of Art and “Tongue-and-Groove” at Lawndale Art Center in Houston, TX.