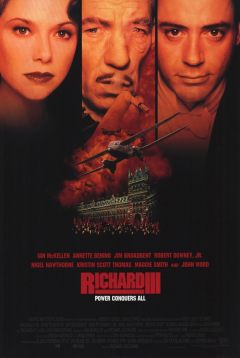 Shakespeare Dallas is partnering with Alamo Drafthouse, TheaterJones, and the AT&T Performing Arts Center to present the Shakespeare 400 Film Series to commemorate the 400 anniversary of William Shakespeare’s death. The festival includes 11 films featuring classic and modern takes on Shakespeare’s plays, as well as movies based on the Bard’s work and life. Ian McKellen, Annette Benning, Jim Broadbent, Nigel Hawthorne, Robert Downey, Jr. star in this tale of Richard III’s Machiavellian rise to power and short reign, reimagined to take place in 1930s.