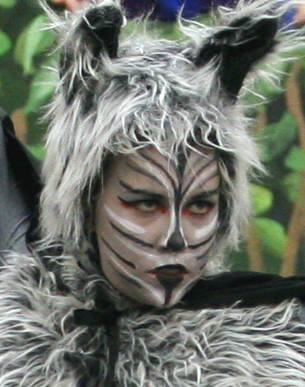 Peter and the Wolf

Lewisville Lake Symphony's Family Concert features Chip Waggoner from Fox 4 as the narrator in Prokofiev’s "Peter and the Wolf." Chip tells a tale so curious that it takes members of the Symphony and dancers from the LakeCities Ballet to help him explain what happens when young Peter and his friends venture into the forest near his home.

The concert takes place at 3:00 p.m. on Sunday, February 28, 2016, at the Frederick Herring Recreation Center, 191 Civic Circle in Lewisville.   Pre-kindergarten through elementary aged youngsters greatly enjoy hearing Peter’s adventure while, it so happens, learning a few things about music along the way. The kids get to sprawl on the gym mats right in front of the action. Parents and grandparents have a good time too watching from the nearby chairs and bleachers.

Symphony volunteers operate an Instrument Petting Zoo after the concert where the kids can try out real orchestral instruments. There is also a workshop where they can make instruments of their own devising.

The ballet is choreographed by Kelly Lannin and staged by Janet Waters.

Adron Ming, Music Director and conductor of the Lewisville Lake Symphony says, "Prokofiev took his two sons to the Moscow Children's Music Theatre to learn about music. They were bored and fidgety so he decided to write a light-hearted piece that would introduce children to the instruments and sounds of the orchestra. The result was 'Peter and the Wolf' and it has been a genuine favorite of kids and grownups ever since."

"Each character in the story is represented by a tune and instrument," explains Ming. "Peter's signature tune is a cheerfully whistling theme in the strings. He has an adventure in a meadow which is territory forbidden by his grandfather (a grumpy bassoon). There is also a cat (a clarinet) stalking in the grass, a duck (a quacking oboe) a bird (an agile flute) and some hunters (drums). The wolf bares its teeth to menacing horns. Peter ends up catching the wolf with the help of his animal friends, and leads a triumphant procession with grandfather still complaining."