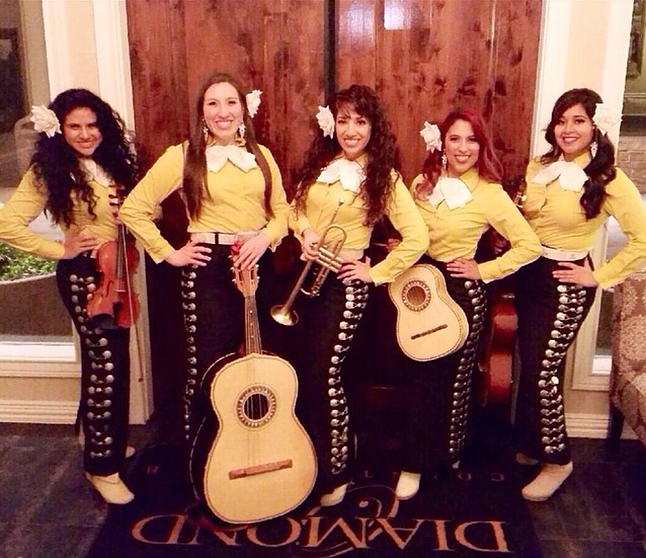 An all-female mariachi group is a rarity in the almost exclusively male world of mariachi.  This musical form traces its roots to the indigenous tribes, Spanish colonialists, and African slaves.  It is an exciting and enchanting musical genre.  Mariachi lyrics frequently describe country life, especially the plants and animals of a region.  Imagery of animals such as roosters and chickens often are metaphors for human relationships.

Having received classical and informal training, Mariachi Rosas Divinas will feature trumpets, violins, guitar, viheula, and guitars.  Instrumental and songs are combined with dance routines that symbolize the lyrics.  The viheula is a lute instrument that provides a special ambience to mariachi music. The heartbeat of the modern Mariachi group is the Guitarron. This six-string bass instrument is tuned A-D-G-C-E-A, and the strings are often plucked in pairs to provide octaves.

Founded in 2004 and directed by Tabitha Sanchez, Maricahi Rosas Divinas has performed at the Gaylord Texas Resort, Dallas Museum of Art, Amarillo Opera House and Dodge Chrysler Show Room at the State Fair of Texas.  Ms. Sanchez states, “We concentrate heavily on the Maricahi style because that is what sets us apart from an orchestra or acoustic band.”