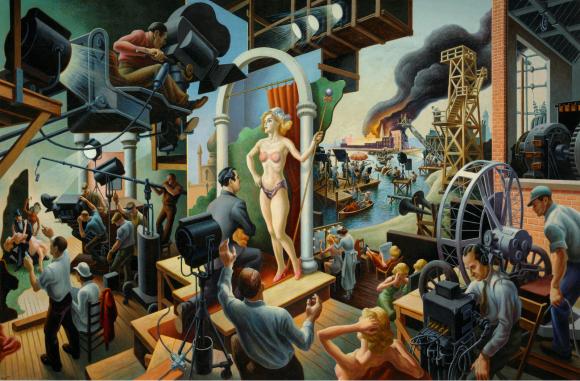 Benton’s associations with the film industry began on the silent film sets of Fort Lee, New Jersey—the first “Hollywood”—and extended to an intimate career-long association with Hollywood’s movers and shakers.

Benton’s awareness that movies were the best and most popular means of telling American tales inspired a signature artistic style that melded centuries-old traditions with movie-production techniques to create images that appealed to a broad range of Americans.

The exhibition brings together nearly 100 works by Benton, including more than thirty of his paintings and murals, as well as a selection of his drawings, prints, and illustrated books in juxtaposition with scenes from some of Hollywood’s greatest films.

The Peabody Essex Museum, Salem, Massachusetts, organized this exhibition in collaboration with the Amon Carter Museum of American Art, and the Nelson-Atkins Museum of Art. The exhibition was made possible in part by Bank of America and a major grant from the National Endowment for the Humanities: Celebrating 50 years of excellence, with additional support from the National Endowment for the Arts. The exhibition is supported by an indemnity from the Federal Council on the Arts and Humanities.