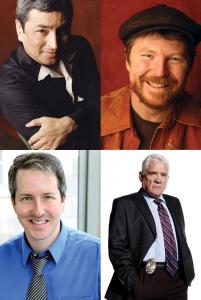 Octavio Solis is a playwright whose plays have been produced in Dallas and across the country. His works have been published in the Chicago Quarterly Review, Eleven Eleven, and Zyzzyva. His new story Mundo Means World will be published in January 2016 in the Catamaran Literary Reader.

Owen Egerton is a novelist, performer, and filmmaker. He is the author of several books, including How Best to Avoid Dying. He’s the writer-director of the psychological horror film Follow and has written for Disney, Warner Brothers, and Fox studios. Egerton also hosts a monthly podcast for KUT, an NPR affiliate, called The Write Up.

G. W. Bailey is perhaps best known for his roles as Sergeant Rizzo in M*A*S*H, Lieutenant Harris in The Police Academy films, and, most recently, Detective Provenza on TNT’s Major Crimes. He is also the Executive Director of the Sunshine Kids Foundation, which provides trips for young cancer patients.