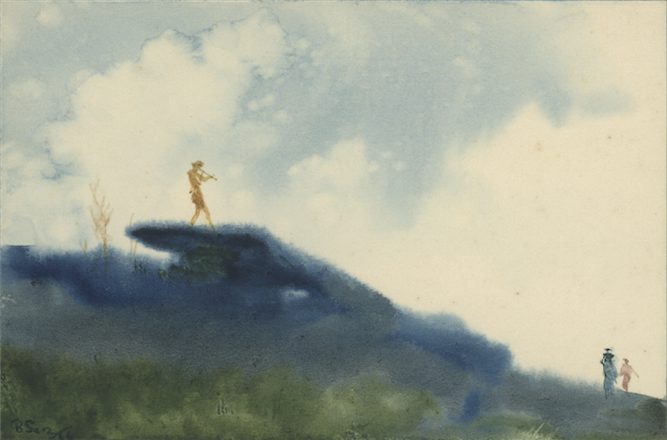 Compact and sparkling like a diamond, as if there were a fire within, is how the small, almost playing-card sized, landscapes of Bireswar Sen, might be described. In this exhibition, one will see what the artist himself had always aimed at doing: “to limn unerringly, lines of beauty with a light that never was on land or sea.”

But landscapes the size of playing-cards? Without losing anything of the immensity that is in nature, or the form and sense of earth, man, and the universal? That, in fact, is the marvel. As will be seen, Bireswar Sen’s small works draw one in to a point of perception that then expands to boundless realms.

Born in Bengal in 1897, Bireswar Sen grew up in stirring times for the cultural field; something of a renaissance in the arts was in the air, led by the celebrated Tagore family. For the young man, there was inspiration to be drawn from the newly founded “Bengal School” of painting, from great teachers like Abanindranath Tagore and Nandalal Bose, from the Bengali’s inherent devotion to the Great Goddess, and from a natural tendency to be immersed in nature. Growing up, Bireswar was as fond of English literature – a love that never left him – as he was of painting. Eventually, however, painting won out when he made the formal transition from teaching English to teaching art, and moved from Calcutta, India to Lucknow, India. The year was 1926.

But things changed for him again when he came into contact, in the early thirties, with the great Russian painter and mystic, Nicholas Roerich, who used to lose himself in the Himalayas and kept painting them in all their majesty and their mystic immensity. Under Roerich’s inspiration, Bireswar Sen began painting nature, but while doing that he went back to the truth embedded in the old Indian saying: “One can see the world around us through the doorway of the eyes, but it is through the mind alone that it can be known.” And he decided to paint on a scale very different from Roerich’s large and roaring canvases. On tiny sheets of paper, using the wash technique that he knew well from Bengal, he created the immensities that one will see in this exhibition at the Crow Collection, reaching with his mind and his hand that almost unattainable intersection between the intimate and the infinite.