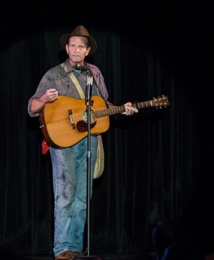 Hop a box car through the Dustbowl with Woody Guthrie and commune with the stories and songs of America's iconic folksinger, saint-of-the-workingman and poet-of-the-people in this critically acclaimed multimedia one-man play with Woody's music and artworks. Woody plays for a union meeting of striking mineworkers who are on the verge of breaking due to vigilante violence. Hard Travelin’ With Woody is a one-man multimedia play written and performed by Randy Noojin. An Eisemann Center Presents Spotlight Artists Show.