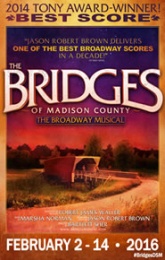 The Bridges of Madison County

Content Warning: Recommended for ages 13 and up.
“Gorgeous, Powerful and rapturous! Bridges is one of the few recent musicals to take up the challenge laid down by the great works of Rodgers and Hammerstein; to tell important stories and somehow make them sing.” –New York Post
THE BRIDGES OF MADISON COUNTY, one of the most romantic stories ever written, is now an irresistible, two-time Tony Award-winning Broadway musical. Based on the best-selling novel by Robert James Waller, THE BRIDGES OF MADISON COUNTY tells the story of Iowa housewife Francesca Johnson and her life-changing, four-day whirlwind romance with traveling photographer Robert Kincaid. It’s an unforgettable story of two people caught between decision and desire, as a chance encounter becomes a second chance at so much more.
This stunning new production features gorgeous, soulful music by Tony Award-winning composer Jason Robert Brown (Parade, The Last Five Years) that draws upon the rich textures of Americana and folk and the sweeping, expressive balladry of classic Broadway. The Daily News hails it as “one of Broadway’s best scores in the last decade.”
With a book by Pulitzer Prize Winner Marcia Norman (The Secret Garden, The Color Purple) and direction by Tony-winner Bartlett Sher (South Pacific, The Light in the Piazza), THE BRIDGES OF MADISON COUNTY is “an evening you will cherish long after the show’s over!” (NPR)