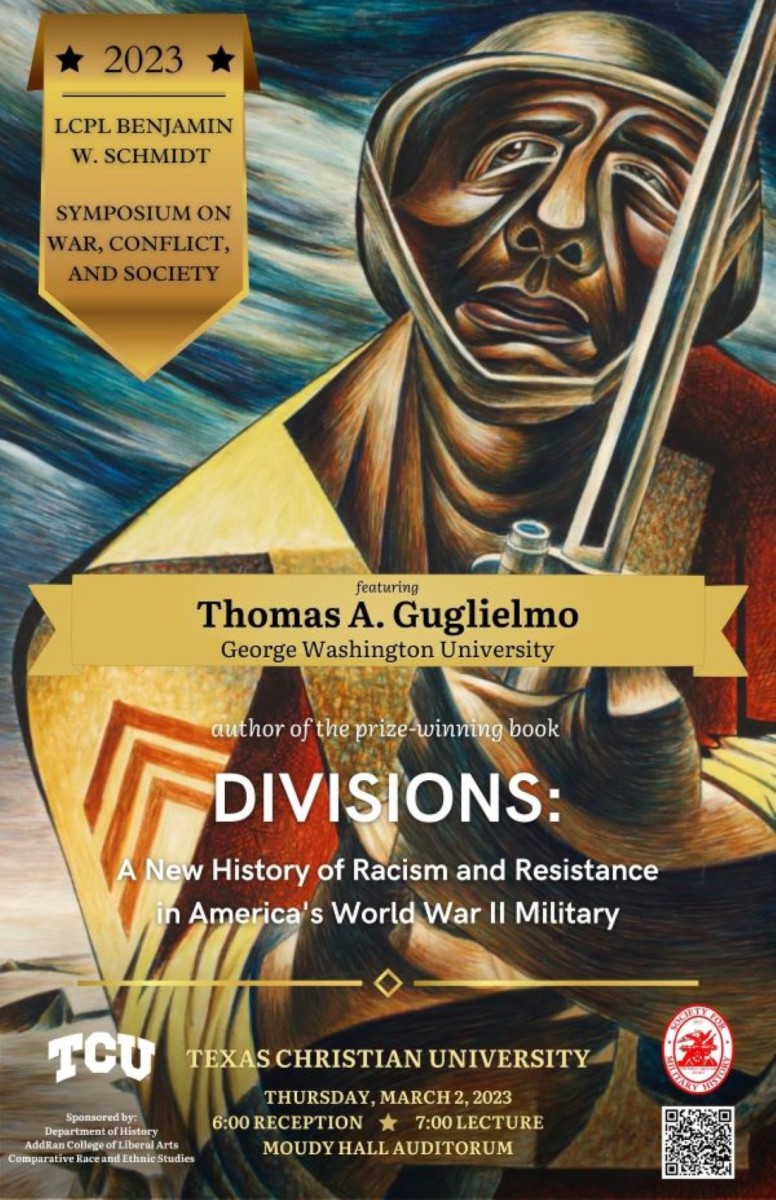 This year, the TCU LCpl. Benjamin W. Schmidt lecture will feature Thomas Guglielmo of George Washington University, whose address will draw from his prize-winning book, Divisions: A New History of Racism and Resistance in America’s World War II Military (Oxford UP 2021), to discuss the topic of race and World War II.

There will be a Q&A following the address.

Thomas A. Guglielmo is an associate professor of American studies at George Washington University. His teaching and research interests include race and ethnic studies, immigration, and twentieth-century U.S. social, political, and military history. He received his Ph.D. in history from the University of Michigan in 2000. Guglielmo is the author of two books: Divisions: A New History of Racism and Resistance in America’s World War II Military (Oxford University Press, 2022), which won the Society for Military History’s Distinguished Book Award and was a finalist for the Gilder Lehrman Military History Prize; and White on Arrival: Race, Color, and Power in Chicago, 1890-1945 (Oxford University Press, 2003), which won the Frederick Jackson Turner Award from the Organization of American Historians and the Allan Nevins Prize from the Society of American Historians.

This symposium is named in memory of Lance Corporal Benjamin Whetstone Schmidt and generously funded by his parents, Dr. David and Teresa Schmidt. A native of San Antonio, Benjamin came to TCU in the fall of 2006. By all accounts, he loved being a Horned Frog, but after three semesters he returned home and joined the Marine Corps. Benjamin excelled as a Marine and became a scout sniper, but after a sea deployment and a tour in Afghanistan, he decided to complete his enlistment and return to TCU. He wanted to finish his degree in History, then pursue a PhD in military history so that he could become a professor. Before he could do so, however, he learned that none of the snipers in his battalion who were about to deploy to Afghanistan had combat experience, and he volunteered to go with them. On October 6, 2011, the eve of the 10th anniversary of the beginning of the American War in Afghanistan, he was killed in a friendly fire accident while on duty in Helmand Province.

The Schmidts created the LCpl. Benjamin W. Schmidt Professorship in War, Conflict, and Society in Twentieth-Century America at Texas Christian University in 2012 to honor their son’s legacy and his passion for history. They have continued to support the History Department in many ways since then, including funding this annual symposium.

We are immensely grateful to Dr. David and Teresa Schmidt for providing us with the opportunity to consider the relationships among war, conflict, and society. We hope that our efforts will shine a light on the costs of war, while honoring the legacy of one who knew them well.